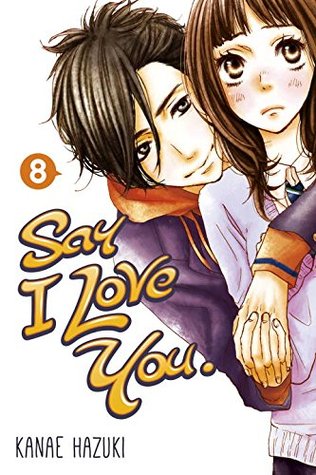 Thankfully this was a volume without too much of Megumi, but dear Lord, do I still hate the girl for what she did in this manga. Mei also isn’t helping with her weak attitude.

The manga and the story were great, we see Yamato and Mei grow a bit closer, we see how much Mei cares about Yamato, but also her fears. I loved the contest and the results, it is amazing that that happened and I am delighted for Mei, though I can also imagine why she reacted like that at the end. She tried so hard, battled her way through her fears, all for Yamato.

I also liked that she finally took some action with Yamato. Normally he is the one who has to start the hugging or the kissing, but in this one we get a rare Mei-kissing-Yamato action and it was amazing. I just wish they would hug/kiss some more, as it is getting a bit boring and annoying. They make such a cute couple but yet I just miss the romance. I miss the kissing and the hugging. At times I feel like they are just friends, friends in love yes, but nothing more than that.

But the problem is still Mei. I like the girl, she is sweet and she does try so hard to do things, but still, 8 volumes in, at least a year if not more must have passed between volume 1 and 8 and yet she is still so insecure, so annoyingly fearful of everything and anything. I can at times relate to her insecure feelings, but mostly I am just getting annoyed with it. How many times does Yamato have to tell her that he loves her, that she is perfect the way she is. Why can’t she just fucking see this? Why is she so blind, what does Yamato have to do to show her that she is good for him, that he doesn’t leave her no matter what. I am amazed with Yamato and how he just keeps complimenting her, comforting her and more. I hope for Mei’s sake that he will keep doing that. I can imagine that even if you love someone, if they keep being so insecure, if they keep doubting your love or that they are worth of your attention, that one might just drift away and find someone else.
Mei also did some stuff good in this manga, she took action, she kicked ass in a contest and she tried to look pretty (though she already does, as long as she doesn’t make scary faces). I can see improvements, but I can also see that the insecurity won’t leave.
She should really open her eyes, so many people love her, like her, find her pretty and want to be friends. In this volume enough people show their support for her.

Yamato, ah, I still love him. He is so dedicated and sweet to Mei and I hope that he and Mei can be together for a long time, and I also hope that what will happen with Megumi in the next volume won’t ruin things.

Megumi, I hate her, and I will never like her. What she did in this volume was just bleh. I mean, seriously? Anyone can see what would happen at the contest. She knows Yamato has a girlfriend, yet she did that. I hate it when girls just don’t seem to understand the word no, and that they just keep pursuing someone even if they have ZERO interest in them. Give up girl, and get back to modelling and leave it at that. Go away. Shoo. We don’t want you.

The art is also a problem. Don’t get me wrong, it is gorgeous, beautiful and I love it. But it just feels weird when characters talk about being fat and having fat legs/butt, but in the art having sticks as legs, small rounds for butt and no belly fat. Sorry, but how I am supposed to take this, for me it just feels like they are being pathetic, they look great and pretty, I would even see them as way too thin, yet they complain about that kind of stuff and try to diet. It is silly, and instead of feeling sorry for the girls, or nodding along, I am just shaking my head at the silly teenagers worrying about non-existent fat.

I am kind of looking forward to the next volume, but I am also worried about what will happen in there. I hope it won’t be a breaking point, and I hope that Megumi will just fuck off after that volume.