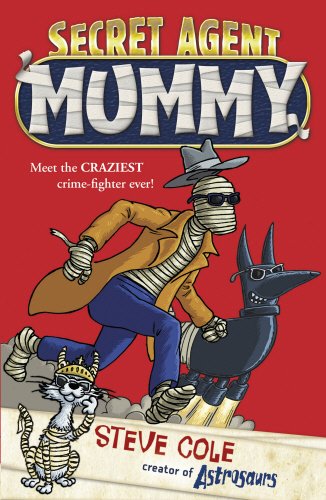 I love Egypt, I love mysteries and detectives, so what do you get if you combine them? This great book!

I really enjoyed this book, the only reason I didn’t rate it higher was because of the puns (they do get a bit lame and how is it that SAM doesn’t get life on earth, even after so many years on it?) and also because of all the coincidences that happened. I just wish it was a bit more magical, and less following a path.

While Niall is the only one who tells us the story, and shows us what happens through his POV, I would say SAM is also a main character.

Niall was a great character, a typical boy though, with a sister he dislikes (but it is mutual, as expected!) and a love for electronics. But with what happens in this book, he becomes a typical boy with something extra. I loved that even though that happened, he still remained pretty much the same as he was. It is refreshing, not a character that instantly gets annoying or thinks he can do anything and everything. phew
I did like the fact his name was also a pun and matched with the whole Egypt theme.

SAM or Secret Agent Mummy was a great character, though I do wonder how he survived through the ages. He is quite an idiot, doesn’t get word puns, takes things a bit too literal and tends to lose all his battles. It is a miracle that he is still alive (well, as much as you can call a mummy alive). But, I could also see that he tried, that he just went for it and tried to capture people, tried to do his job. And in the end (and with some help) he gets really far with stuff. I really hope we will find out more about his past in the next book. We do get some information, but I am still curious and want to know more!

The only recurring character I didn’t like was Mew (if the sister kept popping up, she would have gotten that place). I get she is a goddess or a reincarnation of a goddess, but dear Lord, was the attitude truly needed? I know that in ancient Egypt cats were worshipped, but this cat took it way too far for me.

Mumbum was interesting, but it also shows that this is a kids book. Mumbum is what it says, a dog with a bandaged bum and an electronic body. He often shoves his bum into peoples hands or heads, shakes with his bum. It was just a bit weird.

The story was really great, it introduces us to basic Egyptian stuff (with a hint of something else), we got a big enemy to destroy, mystery to solve. Slowly, you get to learn about the characters, learn about their pasts and more. I am really glad that the author did this. And while at times it is a bit slow, it has some very fast paced parts that will make you wish you held onto something.

There is also a last chapter part that explains some more stuff about Egypt. I didn’t really read it, as I already know that stuff, but I am sure that others who don’t know much about Egypt will love that part.