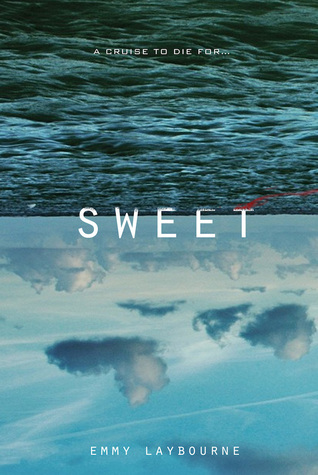 This was an amazing book, though that ending. GAHHHHH. Also a warning, it is pretty gory and gruesome at parts, so if you are squeamish, then I would recommend you either skip the scenes or grab a less gory book.

But this book was epic, awesome and truly wow. It is told from the perspectives of two character. Tom, who is a celebrity, and then we have Laurel, a normal girl who got on the ship thanks to her best friends dad.

At first I was worried, Laurel was a pretty great girl, but Tom? Was he here for girls and money? For getting some attention. But not much later I found out that Tom is a fantastic character. He is sweet, caring and he kicks ass. He clearly can voice his opinion, he sticks to his plan, and unlike all the others doesn’t take Solu. Instead he just follows what his trainer has said and eats normally, watching his meals and keeps exercising. I loved how strong he was, how he pushed through to help people out.

Laurel, ah, I love myself a girl who doesn’t particularly care about dieting. She was a really likeable girl, though she could do without those boots and the clothing style. It just didn’t feel like it matched with who she really was. Which turns out to be true. She was just hiding under all of her clothes. She is insecure, but she doesn’t trust Solu, she is concerned about it, worried that it might be bad. Worried what it might do, and decides to just eat normally. Even if that means that people look at her strangely, even if that means that she is called Tubby by the weight people (rude much?). And hey, in the beginning she couldn’t even eat anything due to her extreme seasickness (the poor thing, you are on a cruise and you are sicker than sick).
I also loved her dedication to her best friend Vivika. Even when things went wrong, even when she should have run away, she still cared for her friend, still tried to help her out. It was amazing. Not everyone would do the same as Laurel did in this book. She is an amazing friend.

From the start we know how Laurel and Tom will end up, and while it was clear from the beginning, I can still say that the way the author wrote it, how they got closer and closer to each other, was done really great and realistically. It wasn’t OMG I have to kiss this guy, no it was slowly getting closer, of course they were drooling over each other (which at times tired me out to read about either Laurel or Tom and what they thought about each other, but it was also cute, so I can forgive them), but they still didn’t instantly latch on to each other. When they finally did get together, it was so adorable, they make a great pair and I hope they will be able to stay together.

Vivika (what a name), she was a great character, and I kind of wish she had gotten a more main character role. We now had 2 characters who both didn’t take Solu, but I would have liked to see Viv’s descent to madness and addiction. I am sure it would have given just that extra oomph to the story had it been added. Now it was all seen through the eyes of those not addicted, it felt a bit one-sided. I would have loved to see how Viv went from a normal girl, wanting to diet, to a girl who can’t stop taking Solu and will do anything to get it.

The story was amazing. The book is from 2 perspectives, but we also get days added to the mix. That way you could easily see how everything went down. How it all started off kind, nice, and just a fun cruise in general to doomsday and shit is hitting the fan.

Because shit is hitting the fan. As the days pass you can slowly see how everything is going from good to bad. People are thinning, people are getting their goals, but you can also see aggression, frustration and slowly addiction coming in. People aren’t acting like their normal selves. From people who are partying and having a good time they are slowly turning to monsters who will not stop at anything to get even the littlest bit of Solu. Friends and family are breaking apart. People turn against each other. And a whole lot more, I won’t say much more, but lets just say around the middle of the book it was getting really nasty, and with each page it got nastier and nastier, at times I was just squeezing the book because of the gory scenes and the stuff people did just to get a lick or a sniff of that Solu stuff. It was really horrific and creepy.
I loved how the author wrote those scenes though, and also the descent to madness. It was amazingly written and it just gave me goosebumps. The idea of being stuck on a ship, with people who will do anything, no matter what, to get Solu. The idea that you can’t run, can’t hide, can’t flee, not just like that anyway. Going outside a room is dangerous, you really have to form a group or at least try to get more people together. It must be horrifying and scary. I can’t imagine what I would do. I am not sure if I would be strong as some of the characters we meet in this book.

Oh, and I have to give extra points to a great side-character named Jaideep. Man, that guy was awesome!

I absolutely disliked the boss of Pipo/Solu. Dear Lord, that guy is the devil. I won’t say much else, for the fear I might spoil stuff, but seriously, that dude is just shivers creepy as hell.

The book describes everything is great detail, I could just see me on the ship, I could just see the people and their wish to become thinner. I could just feel the adrenaline going through me when all shit hit the fan. I was just cheering for our main characters. I really love it when authors can describe their worlds so well, when a book will just pull you in and won’t let you go until that last page.

The last few pages were fantastic, though the ending was sooooo frustrating. I was like, yay! They did this and that, now this and that will happen! And then instead that happened? NOOOOOOOOOOOOOOoooo. Will we ever find out what will happen now? Will Emmy Laybourne write another book? Or will we never know what is going to happen. Though we can guess, and it isn’t pretty. That and something something that happened at the end/middle part were the only 2 pieces of the book I didn’t like.

But, all in all, I would really highly recommend this book to everyone. This is an amazing book and I truly loved it. Emmy Laybourne did it again! Another book that deserves all the praise.