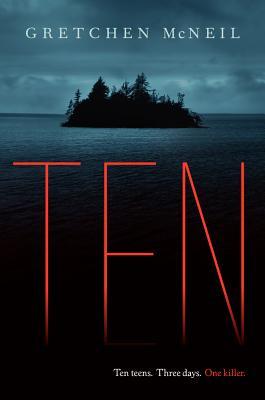 This is a re-read. I read this book in the month October in the year of 2012. So did I love this book as I did back almost 3 years ago? Yes, yes I did. I only remembered some stuff, and at times I felt like I knew more than I wanted, but most of it has luckily faded away. Phew!

Most of my old review still applies, but I want to update and write a new one with updated feelings and thoughts.

I absolutely adored Meg, she seemed to be the only normal girl in the house at times, she also seemed like the only one not really fitting in with the crowd. Everyone else is pretty much popular or is known, she is not popular, she isn’t known that much. But later we find out why she also got an invite. What her purpose is in this bloody game of death.
I loved that Meg tried to keep cool, tried to keep her calm, but you could just see cracks appearing with each person dying, with each bloody murder. Add to that how her bitchy best friend was treating her, and it amazes me that Meg didn’t crack earlier. She is an incredibly strong and determined person. While the rest was just trying to flee, or try to hide, she tried to figure out what the hell was going on. She tried to figure out who did everything, who the murderer really was. And sure, later on someone else helped out too, but it was mostly her.
I didn’t like how she was so friendly with Minnie. It was just a bit creepy, it was less of friendship and more of a parent/child relationship. She took care of her friend, she did everything that her friend wanted, she followed her everywhere. I just wanted to shake her and tell her to get a life. To tell Minnie the honest truth, to tell her that Minnie wasn’t a good friend.
Another thing that seemed odd (and something that happens more often in books) is that Meg took her journal with her to the party. Why would you do that? It is bound to happen that someone stumbles upon it, or you leave it open (or in this case… someone else did). You care so much about your friend, yet you don’t care that she might see the journals? See the truth that you have written down there?

Minnie, bleh, I really disliked her. She was one of the worst characters, she did prove herself near the end, but that was just a short moment, and I don’t know if she genuinely cared or it was due to all the stuff that happened.
I think Minnie was pretty heartless. And sure, she is bipolar, she has some problems, but come on. Demanding all that stuff from your friend? Asking her to comply to all your wishes and means? And get angry when she shows a bit of emotion to guy you want, but who clearly said no to you. Shouldn’t you support your friend? Why should it always be about you and what you want?
Minnie is an enormously selfish girl, she was frustrating and I didn’t like how she acted when people started dying.

We got a big cast of people, some we got to know more than others. Most of them were pretty stereotypical characters, but a few had a bit more than that and it was fun to learn more about them.
Though I would recommend you don’t get too attached to them. This book is pretty gruesome and people will get killed, who, I won’t tell as that is a spoiler, but let me just tell you this, don’t get too close to these people.

The deaths were pretty gruesome and horrific, but they fitted with the story. I think if we just read about someone dying and no details that the book would have been pretty boring. But yeah, some parts just had me shivering and turning away a bit. But even gory, they weren’t super gory, just gruesome.

The story itself was pretty awesome, I really loved all the little references and stuff you see happening in the story, things that you will recognize from other movies or books. Some stuff is so stereotypical for this kind of genre. Teens coming for a party to an island, a storm is raging, power dies and people start dying. And don’t forget revenge.
The diary and why people died was (as soon as the diary was found) pretty easy to see, though who did it, that one was a nice speculation. Was it that one? Or was it that person? Or is there another person, not in the house, not invited. Or is it one of them? It was fun to read about it.

Other than the main story of revenge + gruesome deaths, we also have another story. One about a boy and girl, who both love/like each other but can’t be together, and it was great fun that this was added to the story, it just gave that extra spark that made the book extra awesome. Especially with the whole, who is the killer part? it was just gave that edge to it. What would we do if it turns out it is that guy? Or that girl?

The ending was epic, and I really loved how everything went down. However, there was one tiny thing I didn’t particularly like. I would have loved to know how it went with insert name. Some sort of epilogue, something to let us know the after effects.