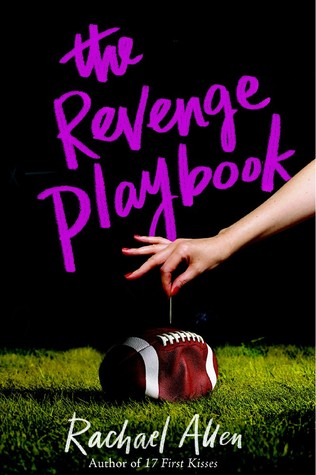 Note: This is a review for the ARC.

Liv, Melanie Jane, Ana and Peyton, 4 girls, and they couldn’t be different. But they are united for one goal. Get revenge on/kick the football team’s ass. It is something that is shown often in books, football (or any other sport) getting preference in school, allowed to do anything without any consequences. It is still something I cannot wrap my head around. Maybe because I am from Europe/the Netherlands. We don’t have all these things in this book. I think that is also what pulls me in. Just like stories about prom, I am interested in those as we don’t have them (unless they are now in schools here (been a while since I last was in a school), but I don’t really see it happening).

Our 4 girls decide to take revenge by participating in a scavenger hunt. The boys are also doing this and they have no clue the girls are doing it. The girls wiggled their way in and got the list with all the things and instructions they need to do. Some of the things on the list were rude and mean, and I disliked the guy who made the list. I won’t spoil anything on whether the girls made it or not, you will have to read the book.

I was horrified by the backlash that happened near the end of the book. Luckily, the girls don’t give up and they have a plan. They will tell their story,  they will show the proof they collected against the football team (and my, oh my, there is a lot).

Because yes, the football club is bad, it is something we notice quite early in the story. Abuse, rape, beatings, bullying, forcing their members to do stuff, weird rituals and several other things. It is all kind of sick and I don’t really get why anyone would want to be part of that. I guess something to do with status and the fact they are apparently dying to play ball regardless of whatever happens to them or the ones they love.

Next to the whole Football team needs to be kicked by a notch, we also have another plotline. Namely the relationship between Melanie Jane and Ana. They were best friends but then something happened. And I will post this in the spoiler field as it is a big one.


The book is told from the 4 girls, each one gets her spotlight. They all have their little or big problems. Next to this we have the whole scavenging hunt and also we go back to the past and back again to the future. At times this confused me, at other times it made the book more fun.

I really enjoyed this book, it was a bit gruesome and at times horrific, but it was also a tale of 4 wonderful girls trying to fight to get something wrong beaten and destroyed. I would really recommend this book to everyone. You should read this book!

2 thoughts on “Review for The Revenge Playbook”