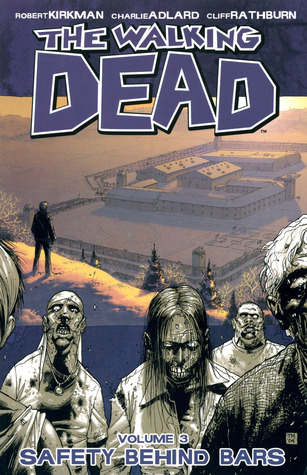 Because, yes, that is what happens in this book. Our group has found a new haven, a prison. It should be safe, after all there are no zombies there (not after everything was cleaned up). Sadly, our group encounters a couple of prisoners. As soon as I saw those guys, I just knew we were in for a hell of a ride. I didn’t trust any of them, especially that older guy. He just had that vibe over him that said to stay the hell away from him.

In this book we barely have zombies eating people, most of the people dying in this book are by their own accord, or because of a certain disgusting someone doing stuff. Bleh, bleh and bleh. It was just messed up and disgusting to read about it and I feel bad that I read it. Yes, I could have avoided it, I read some reviews, but I just hoped it would be done and over with quickly. Sadly, there was quite a lot of gruesome stuff happening, and quite a few panels which showed us the bodies of those that died. Ick, ick and ick. One time is enough, we don’t need to see the same disgusting scene over and over again.
What they did with the person who did stuff? Well, I can’t really say what I would have done. It is a tough choice, but they did need to make one. You can’t let him just walk around, you can’t have him kill off the others as well.

There was at times just too much dialogue, too much talking and I was getting bored with it. I just wanted them to continue with stuff.

Rick is getting unstable with each passing chapter. I am worried about him, I did like him in the first volume, but by now I don’t know what to think of him. I am not sure if I like him or not. If he is still the same guy as he was before. He also went out of the way to do that thing, and I am not sure if I approve of it. To me it seemed that he just did it to make a point, not to help someone.
I did like him finally speaking up against his wife. Because, dear Lord, she needed that.

Lori was annoying, and she is a big part of the reason why I don’t want to continue. Lori’s constant whining, complaining and dismissing or going against every decision is just frustrating. I can imagine that she might not always agree, but it seems to me she is always bitching about one thing or another.
I think I know what is going on with her pregnancy, I read something about it. Yes, the internet, a wonderful place, but also one filled with spoilers. Back then I had no interest in the series so I dismissed it, but now it just sparks something in my mind.
Also, in her profile (at chapter 18) it is said that it is unknown who the father of the child is… um wait, what? Didn’t we already determine that, or did she have sex with something or someone else? After all, she couldn’t have done it with her husband, since he was in a coma during that time. It is a bit weird and silly and it makes me want to check out the internet and see what they think. But I also don’t to be spoiled, in case I still want to read this series.

Andrea is my favourite character, she is so epic with a gun.

The other characters are hit and miss, Tyreese is also someone that I like, but other times I really dislike him and his actions. And that is the way it goes with several other characters.

The ending was another open one, not a big surprise, but still a bit annoying. Now I kind of want to know what is going on, but on the other hand, I also don’t want to know.