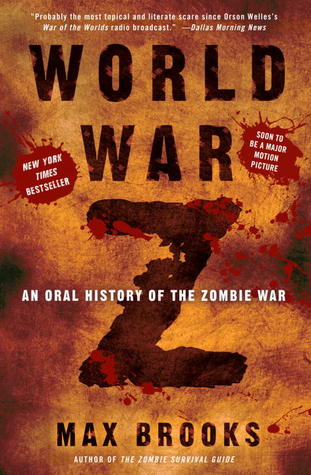 I am just so delighted that this one didn’t turn out to be a dud like the Zombie Survival Guide, now at least my money wasn’t wasted. 😀

As those who read my reviews, and those that saw my updates on GR, could see I wasn’t amused by the accompanying book named: Zombie Survival Guide. I bought both this one and that one in a boxset a year or so ago. I heard lots of good about it and I am always in for a good zombie book. I was really afraid to read this book, afraid it might turn out to be as crappy as the Zombie Survival guide. Thankfully, this one turned out to be pretty great/decent. Sure, I skipped stories/interviews, but I will tell you why in a bit.

But, yeah, I had to skip the stories at times. One can only handle so much army, political or criminal stories until one just gets tired of endless unknown terminology. Because that is what the problem was with this book. I expected this book to have some army stuff, some stuff about politics, however, I think 90% of this book is from the POV from someone in the army, criminal circuit or something else. We do have some people who truly survived on their own, but they are few. And that is a shame. Sure, army and such also are important, but I think it is way more important to tell us the true survivors, those without training, those without help, those without weapons. Those that tried to survive their best, but lost everything. I would have rated the book higher, and I would have probably read all the stories if it had been like this. Now it is just felt boring and an endless parade of military shit.

The book was engaging though, it pulled me in, even the most boring military shit stories pulled me in at times and I couldn’t resist to read them. The writer really did their best to make this story really engaging.

I also liked that the book was chronological. We start when stuff slowly starts to go wrong and we end with the battle won(?). Each part tells us something about that period, about the things that happened, about the lives lost, and about how people got through those times.

If I could pick stories that were the most engaging I would say that adult (then kid) that survived in the wild with his parents and that otaku from Japan. Those were the true stories, the stories that grabbed me and held me until the end.

Something I did also notice was that a lot of the stories were cut off short. These sadly were also most of the true survivor stories. Most of the military stories went on for pages and pages and pages, while a lot of the true survivor stories felt rushed, hurried and ended without much conclusion or feeling of ending. It is a shame, maybe the author didn’t notice, or maybe the author cared more about the other stories.

All in all, would I recommend this book? Mm, yes, I would recommend it. But I would also warn you, if you aren’t interested in too much military shit, or don’t care about difficult terminology that goes with it, then stay away. There are enough other zombie books about real people surviving an apocalypse.