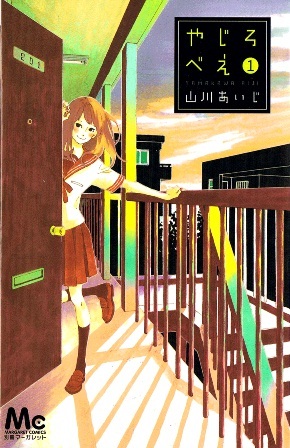 This is an interesting series, and I will finish this, as it is only 2 volumes. Not sure when I will be reading the second volume though, but I am thinking it will be soon.

The manga is about a daughter and a father living together after the mother passed away when the daughter was still little. Now she is 15/16 and she is looking more and more like her mom, which causes for some confusion or some tears with the father who suddenly remembers the love of his life.

The manga is mostly from the POV of Haru, but at times we switch to Seiji and see him talk or go to work or other things. I wish Seiji would have gotten more time in the spotlight. I am curious about him, curious about his dedication to Haru.
Haru is an interesting character, but at times she is just a bit too hyper and irritating to be fun. At times she acts more like a 10-year old than a 15/16-year old girl. The way she acts around Seiji, at times I had to really step away from the manga and remind me that this is a daughter and that Seiji is the (step)-father.

And that is the biggest problem I have with the book. Seiji doesn’t look like a dad. Not at all. He looks more like a guy living with a girl. Maybe it is because he isn’t truly Haru’s dad, but her stepfather, and he took her under his wing when her mom died. He just doesn’t have the dad-vibes. Maybe it is also because he is so young. I don’t know, while their relationship is cute and I love how he cares for Haru, I really have to step back at times and remind myself that this is father and daughter. Maybe not connected by blood or genes, but by other things.

We also have various other characters and each one of them is really interesting. Bonta, a childhood friend, who is really cute. Towa, the son of a friend of Seiji, and we got a whole cast of others. But these 2 boys, they might turn out to really mean something to Haru. Though for now, she really dislikes Towa. 🙂

The art is gorgeous and I really loved it, it was also the main reason that I wanted to check out this manga. The only thing that I didn’t like was how the faces were drawn at times. Haru pulls some really ridiculous faces and instead of looking natural it looks over-the-top and weird.

The bonus chapter was interesting, it gave us more insight in Towa and how he met Haru, and also a bit more about his past. I am glad it was added, it was really fun to see what he thought about things.

Would I recommend this manga? Mm, I am not sure yet. It is cute, it is a real slice of life with some comedy, but again, I still think the relationship with Haru and Seiji is a bit weird.