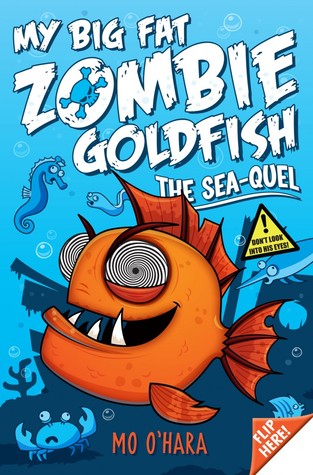 The second book in this series, this time our two stories are about a vacation trip and a play at school. Of course, as you can imagine, when you have a pet like Frankie nothing in your life will be normal.

The first story is about Tom, Pradeep, Mark, Sami and their dads are going on a small vacation trip to fish. Like we know from the previous book, no day is the same with these kids. Mark is still trying to become an evil scientist and he has a new goal in the first story.
I absolutely loved the first story, not only because we meet a new friend (Sparky), but there are also a ton of Scooby Doo references. I just absolutely adore the Scooby Doo show (have watched all of them (often multiple times), and I watched almost all of the movies)), and I am always happily surprised when someone references to the show. While the show still has movies and series coming out, I didn’t expect many people to still know it. It is not often that I see the show referenced and it is such a shame, more people should know about it. 🙂

The second story is about a play that is being done at Tom and Pradeep’s school. Of course stuff go wrong, but how they go wrong was what was so great about it. A bit typical, but still so much fun to see how Pradeep and Tom (and also Sami) try to save the school and the play.
Mark’s plan was hilarious and it such a silly plan, typical for Mark though.

The story really made me laugh aloud quite a few times, Frankie’s antics are just fantastic. I just love this zombie fish and his karate/kung fu skills. His dedication to help out Pradeep and Tom is great.

While I would recommend you read the first book, if you start with this one that is also OK, you would miss some story, but it is explained what Frankie is, how he came to exist and why he has a grudge against Mark. So if you accidentally would read this book instead of the first, no problem, just be sure to also read the first one.

I do have to give an extra mention to the fantastic title and the pun that is in there. The other books that are coming after this one also have fantastic word puns in their titles and I just love it when books do that.

I also love the lighthouse keeper and how Tom and Pradeep reacted when they figured he knew quite a lot of stuff they thought they were the only ones to know. Especially that ending just made me laugh so hard. Go Lighthouse keeper!

Of course there are still illustrations in the book and I love them. Their style (cartoonish) fits perfectly with this kind of story and it really gives the book something extra (not that it would need that though).

All in all, this was another laugh aloud book that I would recommend to everyone.