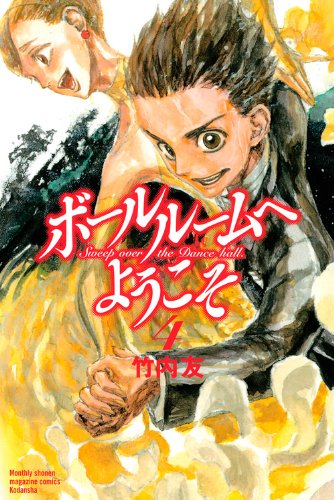 This volume continues on the battle/competition at Tenpei Cup. Lots of dancing, drama and emotion, and even more dislike for 2 characters. Mako and Fujita are great character, doing their best, fighting their way through this competition and being awesome, even though Fujita’s skill is way way lower than most of the people in the competition.

The main focus of the manga is of course between Gaju and Fujita, they are still having this battle, and boy oh boy, did I dislike Gaju. Fujita remains pretty civil and kind, but Gaju is just being dick who is afraid to lose face and lose this competition. He doesn’t see what is in front of him, doesn’t care about his partner. The only way he thinks of her is as some kind of trophy, and sorry, that is just pathetic. Sure, they were good, but I don’t get how they would win. Gaju’s attitude, Gaju’s way of acting, the way he did certain things that weren’t allowed. I don’t get how the judges could miss that. Naturally, Fujita isn’t that good, so it was expected that they wouldn’t win, but come on, why the stereotypical win for Gaju.
Gaju makes remarks, he smirks all the time, acts like he is some kind of god, it is just ridiculous. And I hate how he treats his sister. She deserves better, I really don’t get why she is so clingy towards him.
And what he said near the end? Nice going there, really showing that you can handle something like that. NOT.

Shizuku? Bleh, bleh and bleh. I am really starting to dislike her: I am epic and everyone should bow before me-attitude. Sure girl, you are a good dancer, but you have a lot to learn. That last part? It just didn’t feel professional.

The dances were fun to see, though with the art at times I was wondering how bodies can make such movements or be so distorted that it looks bad. I loved that we also saw the reactions of the audience, the judges and other people. That just gave the story something extra, and made us see how the couples were doing.

The manga also showed us a bit of backstory on the Akagi siblings and I love that this was added to the volume, it gave more depth to the story, especially made me care more for Mako. Wow, that girl is awesome, and I can see her make it very very far.

Sadly, the art was still pretty bad. It feels rushed, it feels like I am reading a horror manga (bodies out of proportion, seemingly looking all bend and broken and more), and the reasons I really read this manga is for the fact is is about dancing, has a good story with a fair amount of drama, otherwise I would have dropped the manga by now. Since I mostly do that if the art (the most important thing for me in a manga) is this bad.

I can’t wait to read the next volume, hopefully I can find it soon. I am quite curious as to how this will continue.