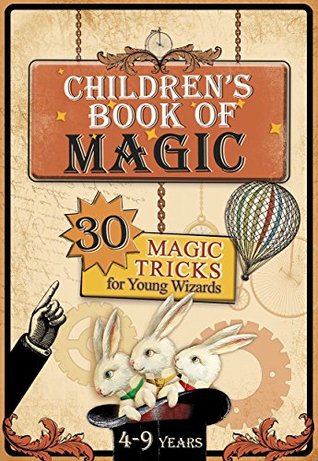 I was really interested in this book. I still remember when I was young that I had magic kit and that I enjoyed trying out the tricks. So hearing there is a new book on the market and that I could review it, delighted me a lot. The book sure was a trip through nostalgia. I can still remember some of those tricks mentioned here.

I haven’t done/checked all the tricks (as there are quite a lot, 30 in total with very descriptive explanations), but I checked a few from each difficulty level that sounded really fun or that I didn’t know yet. I did the same with an origami book, I reviewed some weeks ago. I just couldn’t do or check them all, as that would mean I would spend days or even weeks on a book. And I also don’t have all the items needed (for instance, I don’t really have 2 decks of cards. I might have one, somewhere, but where, no clue, I don’t really play card games). But, I read through the tricks, did a quite a few of them, and laughed at some of the expressions in the comics.

Before I start talking about the tricks, let me talk about the book itself too. Before you begin you will find an index with which tricks there are and what difficulty level they are (the difficulty level is done by way of bunnies in a hat. One bunny in a hat is easy, two bunnies is medium, and when there are three bunnies it is a hard trick.
I love that this is done, they incorporated an element of magic/trick of magic as a way to indicate how hard a trick is. I am sure this will really appeal to kids.
In the index it is also mentioned what one should have as props, sometimes not even props, but things like: ‘… and a moment to get prepared.’ That is great that this is done, it is clear and easy to see, now you can not only check the difficulty but also see if you have those props at hand.

I loved the golden rules, more books like this should have them. And I love that they have put it at the beginning, so that kids will pass it when reading the book.

I love the way the tricks are done. It is all really visual. Each trick is accompanied with a comic on how the trick would look to the public and then how it works in clear language with illustrations so kids will easily be able to tell what to do and how it should be looking.
I really love the comic, the art style is really fun and nice.
At the end of each trick there is an advice part that advices on what best to use, and also what to do if you find said trick a bit too difficult. It also encourages kids to keep trying, even when things don’t really work out the first time or even the third or fifth time. I have seen other magic books were this isn’t done, and it is quite encouraging that this book adds it. I feel it is important to add it, especially with kids, they generally might just give up if something is too difficult or when something doesn’t work out, and that would be a shame. Good job on adding it. 🙂

I tried out quite a few of the tricks and it was oh so much fun to try them out. Of course, not all of them went correctly the first time, but thanks to the illustrations and the text next to them, I could easily try again until it did work out. And work out it did, I will be sure to remember some of these tricks and maybe try them out on some people.

There is one thing that I would feel would improve the book, begin with some easier tricks instead. I know, there is an index and you can pick any trick you want and even see how difficult it is, but why start with something difficult as the first trick. Maybe build it up first. Say, start with an easy 1 bunny trick, then after that one another 1 bunny trick, and after that 2 bunnies and then a trick with 3, after that you can just do it randomly and kids can pick up whichever trick they would want after that. But an introduction trick would be fun and wouldn’t be so daunting to start with.

And while this one probably can’t be improved (because of the amount of text), but at times the text bubbles from the comics would fall over the top illustrations, hiding the ‘Effect illustrations’ and also the ‘What the audience will see’-part. Again, this is probably something that can’t be fixed, but it is still something that stood out to me.

All in all, I had a terrific time reading and trying out the tricks in this book. The book is really visual with lots of images, illustrations and how-to’s. This is a great book for kids who want to know more about magic. There are all kinds of tricks in this one, not only with props, some you can just do with your hands (though those are quite tricky the first few times).
I would really recommend this book to kids who like magic tricks, maybe they are just interested in the know-how, maybe they want to be little wizards themselves, either way, I am sure this book will appeal to kids (and, I have to be honest, adults as well. :)).