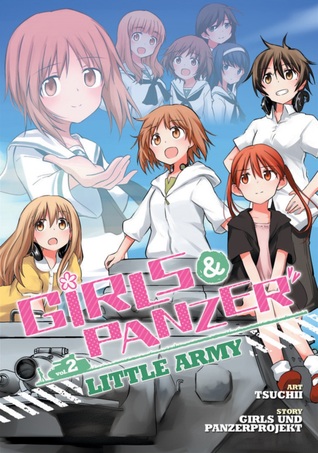 This was even better than the first volume.

We start off with were we left the last time, and I am happy to see this happening. There were some loose ends at the last volume and I was hoping to see them wrapped up. We also have a tank battle and we also find out more about Miho’s family, how she feels about it, and about her family’s panzerkraft. At times I just wanted to tell Miho everything will be OK, since this volume isn’t always the happiest.

Miho finds out that the sister she is looking up to isn’t always that kind or gentle. But we also find out why her sister is like this, why she does things she does. It is something that we see more often in books or manga. The eldest daughter or son, destined to follow in the footsteps of mommy and daddy, and not being able to voice an opinion on a matter. There is also another reason why Maho follows the rules, but I will leave that one out, don’t want to spoil anything.

Miho is still an interesting character, though at times I was frustrated with her behaviour, how she kept running or hiding instead of facing things. I know, she is a kid in this one, but I had just expected more, especially since she quite often does show she capable of staying put and saying something.

Her friendship with her friends was heart-warming, I love these girls, they really are great friends, and also a great team.

The tank battles were fun, but they are also a bit boring, luckily they don’t drag out like in the anime. I know this is a manga about tanks, but the battles just seem boring and stretched out. I had expected more explosions and more fun, not endless waiting and endless doing nothing.

The art is pretty great and it is one of the reasons why I rate this book with 4 stars. It seems even better than the last volume.

All in all, a lot of things happen in this volume. Due to them being spoilerish I didn’t discuss them, and thus the review isn’t that long.
I can just say that the ending is great and that it wrapped up things nicely. No more loose ends or questions for me. Though, wait, one thing, did she ever have meet them again (won’t say who, this is the best way I can phrase this sentence without too much spoilers).

Would I recommend this series to people? Yes, yes I would. Though I would recommend you check out the series first, while this one shows us Miho’s past, a few things would be missed if you don’t know anything of the series.