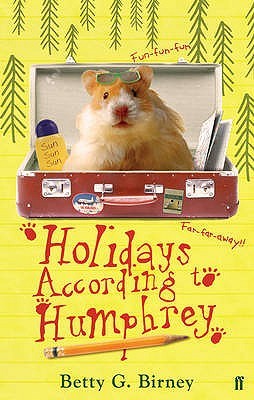 Yay, my library #3 finally had a part of this series that I didn’t read yet.

While this was a fun book, it also had some moments that I didn’t entirely like. There were at least 2 characters who I didn’t like and they played quite a role in this book, and while they do have a change of heart near the end, I felt it was a bit too convenient for them to change.

But let me talk about the good stuff first. I loved, adored and was so happy that this book took place outside of school. Instead of endless stories (though also quite fun) about classrooms, about lessons, about teachers, this one was about Humphrey (and also Og) spending a summer vacation at a camp with their favourite teacher! It was so fun to see a change of scenery. It was a fun time for Humphrey too, though also at times a bit scary. He is totally not used to being outdoors like this, so he is pretty much scared out of his wits when he hears noises, when he hears about stuff that roams in the woods and when the kids (another part I loved, if the kids were good, one cabin could have Humphrey or Og for the night) told scary stories about a place called Haunted Howler.

It was just brilliant to see how Humphrey was all afraid at first when he found out school would close (or at least for him it came over as closing, and then in a permanent way), and then he found out he wasn’t being abandoned at all, he was just going to go with someone. 🙂 I could just imagine him, alone in his cage, no one to ask what will happen, and then slowly finding out stuff and then the delight to find out who was at the camp, and what a camp is.

Like in all the other Humphrey books, he helps out kids. He even helps out his friend Og. It is a great thing, even though Humphrey is afraid, even if he doesn’t know the surroundings, if he can help someone, he will.

There were various characters we know from the books, but also some new ones.
Like for instance Brad. Or as Humphrey called him once: Bragging Brad. Because that is what he did, and complain. How his old camp was so much better, how this and that was better, how this camp sucked and how he had all kinds of awesome stuff and no one else had that. It just got soooo annoying. I can imagine why a kid who doesn’t know anyone would do it, but it just got frustrating. If you don’t like a camp, then that sucks, no need to make others miserable and you won’t make friends if you act like a little poop.

The second new character (and another annoying one) was Noah. He didn’t once want to listen to the adults when they clearly told him that there are animals that belong in the wild, and those that have always been in captivity and thus can’t just be released without it causing troubles. Even so, he kept on protesting, he kept on discussing, he just kept on doing stuff that was just bad. And yes, I know he is a kid, but come on, if various people (adults and kids) tell you that while the snake and the bird are OK to release, but it isn’t a good idea to release the hamster and the frog, then just nod and say OK. Don’t just try to do stupid things, due to him we almost lost that one animal, and sorry, but why didn’t he get any punishment? Yes, I know it was written as it being an accident, but after all the stuff he did? I don’t believe it was just an accident. Stupid kid. Bleh.

I loved the Clash of the Cabins and also all the other courses and stuff that the camp offered. It sounds like a sweet camp and I can imagine that kids love it.

But in general the book was pretty good and I enjoyed it. Humphrey is a great character and I do still love books about hamsters, especially ones that are quite a bit more human and try to learn all kinds of fun stuff.

Hopefully my library will have the other books as well, and otherwise I hope to find them someday again.

Would I recommend this book? Yes, it is a really good book, and now that it is summer, it is the perfect read for that season.