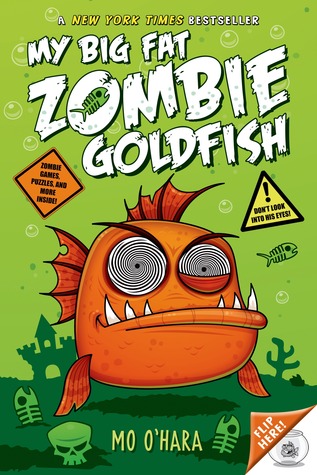 I saw this one in a book store here (an English book here, at a normal price? It’s a miracle!) and I had to buy it as I heard a lot of good about this little book, and I saw it on Twitter a lot. I do love zombies, and I was curious to see what a zombie goldfish would be like. Never read a book about those. The only other zombie pet I read about was a hamster.

This book tells us how Frankie was created, I just felt so sorry for Frankie. Being an experiment for a big (trying to evil scientist) brother. Luckily for Frankie he has 2 people who care about him and revive him Frankenstein-style, thus creating a very epic little zombie goldfish with a big personality.

Frankie was just awesome, he is one tough little fishy and I just loved how he enjoyed green foods (which generally are mouldy), how he would get all hyper when danger (or brothers) came close to him. He was quite epic with his fins (he really knows some self-defence) and he really was a good friend to Tom and Pradeep, and also later Sami (the little sister of Pradeep).

Lets talk about the humans. We have several. Our main characters are Pradeep and Tom, but we also have Sami (Pradeep’s sister, who often tags along) and Mark (trying to be an evil scientist, but failing oh so hard in general, he is also very rude and mean) and at times we also see Pradeep’s older brother Sanj (who is also trying to be evil, only he is more of the hacking and computer stuff, while Mark is more evil scientist and trying to create stuff.

Of course the plots are generally a bit the same (not only in this book, but also the others). Tom and Pradeep either stay at home or go somewhere, something happens, they take action with Frankie, generally it is Mark who is doing the bad stuff and they solve whatever is going on.
I don’t mind this at all. Because the rest of the story, the setting, the characters are still great and really fun, and with each book you learn a bit more about the characters, and also will find new characters to love.

At times I was annoyed and frustrated with Mark, that he got away with a lot of stuff. Sure, he got into some trouble, but generally he was just being a big bully to his little brother and his friend(s). It is something that happens a lot in books though, big brother bullying his little brother, I don’t really see the appeal and at times I wish we would have more books about brothers being kind to each other and helping each other out. Now, I guess that wouldn’t fit this book, as that would mean Frankie wouldn’t be around and that there would be no real reason for Frankie to stay.

Tom and Pradeep are fun characters, I love their friendship and how they communicate between each other, with just one look they could tell what the other was saying, and no it wasn’t simple stuff, at times it was a whole story and they would still understand each other.
It was really fun that Tom takes Frankie with him everywhere, something he learned to do after Mark tried to do stuff to Frankie, and Frankie in return, tried to do stuff to Mark.

Surprisingly, I normally don’t like little sisters in stories. They are often annoying, clingy. Sami however is a bit clingy, but mostly tries to help out even though she is really young. She loves Frankie and does a lot things to help him out.

I love how the hypnotizing works and I just laugh each time that someone got hypnotized. Swishy Little Fishy. 😀

What more? Ah yes, something that I found out while reading. I thought this would be one big book, but as the story progressed and I was getting worried on how it would go on, as I was now around page 80 and this story was winding down and going to a conclusion. As I flipped the pages, I found out that one book actually has 2 stories in it. Stories that are kind of a continuation of the first one, but also a totally brand new story.
I really like that, so we get 2 stories in one book? Yes please!

The first story was all about how Frankie came to be Frankie, the second story was about Mark and Sanj trying to take over the school. Both were really fun stories.

We also have some illustrations, which made the book even more fun.

All in all, I just loved this book, it was funny, hilarious, though at times a bit over the top. I loved the kitchen ladies in the second story, they totally kicked ass.
I would really recommend this book if you are looking for a funny story. 🙂