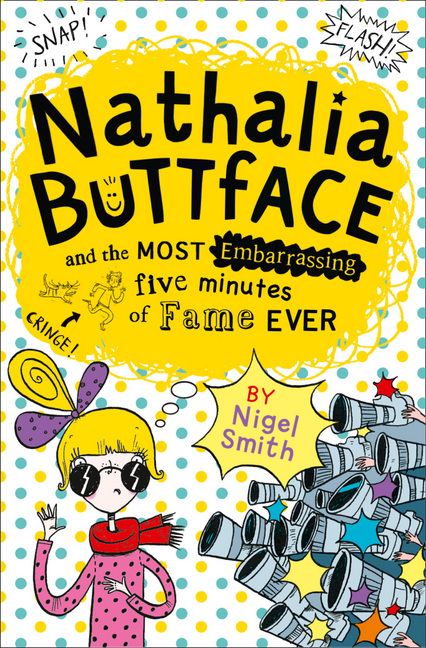 The third book in this hilarious series about a girl with a superembarrassing dad.

Though I have to say that she doesn’t always handle stuff right either. Of course that is the goal of the book, to have a little girl overreact to her dad’s things. Well, overreact… at times she did overreact, but generally I was totally agreeing with her on her dad. The things he does, the plans he makes. I do wonder about his brains at times. Not even thinking that something like that would be embarrassing to people, not even thinking about the consequences, but instead just doing what he thinks is good.

But in this one we also see a side of Nathalia I didn’t like. I don’t mind her being embarrassed, I love the punishments she gives her dad, I love how she tries to fit in, but the whole fame thing? I just wanted to shake that girl and get her back to her senses. At first she just did it for normal(ish) reasons, but that quickly changed and you saw that she changed to a fairly normal girl, to one with so much fame on her brain that it made her annoying.
Her friend Penny tried to tell her and show her that something wasn’t right, but instead Nathalia waved her away and acted like Penny was the one being at fault. Instead Nathalia just plainly dumped Penny and went off with the popular crowd. A crowd she didn’t even like that much, well, only for the obvious reason of climbing the social ladder.

Nathalia’s way to fame was funny, really, nothing goes right. But, again, that is to be expected when you trust on Darius and your dad. Knowing full well how those 2 are, especially together. The one one who can handle those 2 is Nathalia’s mom.

While she isn’t around much, I really liked Nathalia’s mom. I love how she can just glare at people and people will do whatever she wants. 🙂 It is amazing.

There were lots of funny moments, and there is also a lesson that can be learned in this book. Don’t let fame get to your head. See what is beyond that.

The animal house sounded like a place from hell. Especially with Simba around. But it fitted with Darius who was right at home. Poor Darius though, his family situation just sucks, and I can imagine why he ended up being the way he is now.

All in all, I am hoping there will be more books in this series, as I don’t want this one to end. It is a fun series, and while at times a bit predictable, it is a series I will keep following. And I would recommend it to everyone.