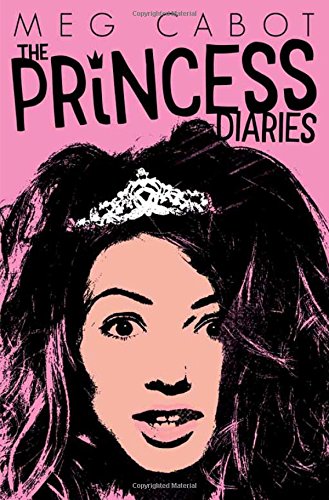 I have been hoping to read this series for a long time, but I just couldn’t find it easily.

The libraries here only sporadically had books from this series, generally in Dutch (believe me, you don’t want to read that), and when I tried to find them on Amazon I only found the bleh covers or the books being out of print. Luckily, I recently found out that Macmillan Children’s Books will be re-releasing these books, with new fancy covers. Which means I can now get the whole series as it is slowly released. 🙂 Thanks Macmillan Children’s Books for re-releasing them!

Now comes the question, did I like the book. The book is really hyped, lots of people love it and have read it. I have had a few recommendations and friends saying I should read the books, so there was a factor of stress, will I like it, or will I dislike it? Well, as my rating clearly says, I really liked the book. Of course, at times it was a bit boring, or at times a bit too dramatic (Mia does have a tendency for drama), but generally I really liked the book and I laughed aloud at Mia’s antics, at what she said, how she reacted to things.

Mia or Amelia (no clue how we go from Amelia to Mia though) was a terrific and fun character. One day she is just a normal, average girl, flunking her algebra/math classes and the only stressful thing is the fact that her mom is dating her algebra/math teacher, and the next she finds out she is the princess to a small principality. Suddenly her life is filled with not only flunking classes, and having to worry about everyone finding out about her mom’s love life with the teacher, but also filled with princess classes (because even though one is a princess, they still have to be taught how to be one exactly), paparazzi, people only caring for her status and trying the get in her good graces so they might get further in life, to arguments with her friend (who really do notice that Mia is different) and much more.
I loved how Mia tried to keep herself the same even when faced with all these things, instead of moping around (which she could have done), she went on with her life, though I have to say it took a bit of bribing to get her to her lessons (I would probably also wouldn’t have gone to those lessons if my grandma was like that).
I loved reading about her life, she is such a typical teenager (even with the added princess status). She is worrying about her hair (which apparently is a disaster area), she worries about boys (though she is also fangirling over them, especially Josh Richter), friendship, school, she is embarrassed by her parents (her mom for dating her teacher, her dad, well for other reasons, like him treating her like a little girl).
There was just one thing I didn’t like about Mia. I am all OK with people not eating meat, trying for a better world, but at times I just was annoyed with how Mia brought things, how she talked about people who didn’t want to save the world. And how she kept pushing people. Pushing people to do things you like is a big no no. A small nudge at times, sure, but it just got a bit annoying.
I loved it when Mia found out she was a princess, it took her quite some time to figure out that her dad talked about her. She was totally absorbed in the other things he said and it was hilarious when she actually found out. 🙂

I have to say a big reason why I didn’t rate the book higher was because of Lilly. At times she was a fantastic character, but quite often she annoyed me to death. Her way of talking (like she was sooooo much better), her attitude towards things (that whole Ho-gate just made my eyes roll), how she treated Mia at times and several other things, she just wasn’t my favourite character. I just wanted to shake her and get some sense in her. Hoping that underneath all that elite attitude there was a real teenage girl.

I didn’t like Josh Richter, not from the start and especially not near the end. Dear Lord, typical jock. :\ I won’t spoil much, but it is clear that Mia only went for him because of his looks and didn’t care to see further than that.

The book is written in diary form and I just loved it. Though I have to say the whole using it as an agenda/using it for notes thing got a bit annoying as instead of providing me with a laugh that Mia is still using that thing for other things, it kicked me out of the story. In the end I just tend to quickly scan it, and skip it.

All in all, this was a great book, I had a lot of laughs and I just love the characters and the story was fun. I will be sure to buy the other books as they come out (all of them have such pretty covers!), and hopefully around this time next year I will have all the Princess Diaires books on my shelves. Can’t wait!

Ah, I want to share some of my favourite quotes with you all.
*Geez! Whatever happened to nice grandmothers, who bake brownies for you and tell you how precious you are? It’s just my luck I get one who has tattooed eyeliner and tells me I look like a hooker.

*Oh my God, I can’t believe I just wrote that. I will NEVER get used to being Princess Amelia Renaldo! I don’t even know who that is! It sounds like the name of some stupid line of make-up, or of somebody from a Disney movie who’s been missing and just recovered her memory, or something.

*It sort of reminded me of Captain Picard’s voice, on Star Trek: The Next Generation. My dad actually has a lot in common with Captain Picard. You know, he’s white and bald and has to rule over a small populace.
Except that Captain Picard always makes everything OK by the end of the episode, and I sincerely doubt everything will be OK for me.

*Then she went on to describe me as ‘the statuesque beauty who is the product of Helen and Phillipe’s tempestuous whirlwind college romance’.
HELLO???? CAROL FERNANDEZ, WHAT ARE YOU ON????

2 thoughts on “Review for Princess Diaries”