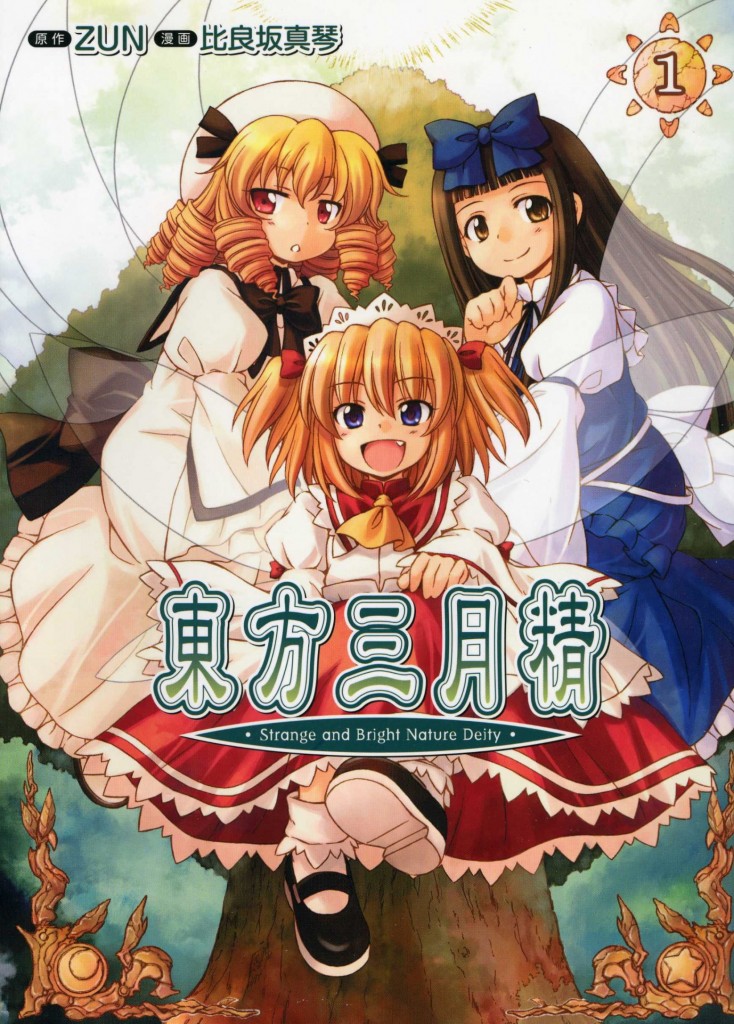 Not a long review, but a shortish review about the 3 volumes in this series.

After my internet died yesterday, I decided to check out this manga and see if it was good, I had it lying around for some time, but never got time to read it. Finally I had time! And I am happy I finally go to read this one as it was quite fun, though I have to be honest, also a bit boring at times as the story was mostly the same, just with a different setting/season.

The manga is about our 3 fairies of light. Sunny, Luna and Star. These 3 fairies are pretty weak (I have to be honest, come on, deflecting light? Noisecancelling? Radar to find people/animate objects? It is all about boring and plain, and while it matches them and their personalities, I just wish they had some better powers). These 3 love to do pranks on people, their favourite victim? The shrine maiden Reimu. They live near the Shrine and are often found there, stalking people and playing pranks on them. Of course, those that know Reimu, know that she won’t hesitate to use violence, so you can just imagine what happens to little fairies who dare to mess with her.

Still I really loved these fairies, they are quite fun and interesting and each of them has their own personality and it was wonderful seeing how these 3 lived together and had a grand old time, just going through life, playing pranks, collecting and stealing food, making jokes between each other and so much more.

Ah and the fairies (and this comes to no surprise) love drinking. Though this is something most of the residents like to do in Gensoukyou. A nice cup of sake or wine and some good food, they all like that.  🙂

Each story is separated in 2 or 3 chapters, and while they were fun, at times I just got a bit bored with the antics of the fairies and how easily they believed stuff. It was fun to see them meet other characters from the Touhou world. From Reisen to Remilia, to Sakuya and Marisa. It was so much fun to see all the characters I love so much come to life in this manga.

The art was pretty great, I loved the way it looked and also how the backgrounds looked. There were quite a few details on things, which made the stories really pop out and come to life.

All in all, I would recommend this manga if you are looking for something fun. But, again, be warned, it might get a bit boring because it is so much of the same.