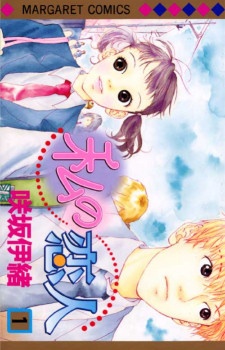 Wow, this was just not what I expected. What I did expect was what the blurb said. Our main girl meets the mysterious confession caller when she hits high school and let the romance begin. What we actually got is a girl jealous of her sister, a whole poo load of drama, more drama, some more confessions and maybe a tiny sliver of romance though I see it more as budding friendship. Wow. :\

Junta was a pretty good character, though I really hope that he and Emi will get together, they would make a cute couple. Junta is a really sweet towards people, especially Emi, he helped her out in this volume, reassured her, talked to her, and was there when she needed him.
I did feel sorry for him for confessing and then having the phone hung up on him, not knowing that he just had the wrong girl on the line.

Emi, dear Lord, drama queen. Sure, I can imagine why she acted the way she did, anyone would if everyone compares one to their sister, or downgrades one because of their sister. But seriously? I just got tired of her and how instead of saying something in all these years (not only to her parents for treating her this way, but also her friends), she kept whining and crying about it, and also cropping it up and just not being honest. I just wanted to shake her and tell her she had enough good qualities in her, that she just needs to figure out and show to the world. Maybe she isn’t good in grades, maybe she isn’t good in the looks department (according to her), but she is a sweet, kind and protecting person. She will do anything for her friends and her family. If only she can see that.
So yeah, I got quite tired of her sister obsession, and how she downgraded herself every time. Wishing she had her sisters face and other creepy stuff like that.
Also, she is going to High School, so that means she must be around 15 (if I have to believe various sources on the Japanese education system), however she looks and acts like she is 12/13 years old. Quite confusing.

Romance? Budding? Overflowing? As I said, the blurb promises romance, but sorry, the only romance I saw in this book was Emi’s sister and her boyfriend. Junta and Emi? Not so much. Like I said, I don’t see that many sparks flying. Yes, on Emi’s side, but even she isn’t sure about it.

There is also a whole revelation, though you can puzzle the parts together before it is truly revealed, was interesting, though again, all that drama. Seriously. Was that truly needed?

The art. I am still not entirely sure I like it. The bodies look pretty OK, but the faces, the hair, it just looks weird and at times they looked like aliens. Also what is up with Emi’s hair. Hair doesn’t shrink and grow back afterwards (one time she had tiny little pigtails, the next day her pigtails are big again, and no, they weren’t folded or something else, and no, no time skips or anything).

Since this is a 2 volume manga (though I guess it is more accurately said, 6 chapters + 2 one shots), I will finish this one, even if I didn’t enjoy it that much.

Would I recommend this one? Not really.