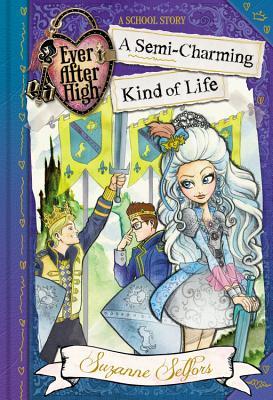 Another book in this series, and I have to say that while I like them, they start to feel repetitive, even with a new character for each book.

It just feels that the story never really progresses. You have Rebels and those that will follow the story without complaints, and that keeps getting pushed in your face, however there is no epic battle or some epic protest happening. Instead we just find ourselves with a new character who turns out to be quite a rebel and thus we get a repeat of all the other books. Rebel is bad, you shouldn’t go against your story, blababa.

But, in this book we also have a new thing. The whole I am a girl and I want to do boy things, I want to do things, not just wait and sit around doing princessy. And it was fun, and I approve of girls wanting to do boy stuff, but it just felt a bit forced and after a bit I was just tired with it and I wanted to push her to say something and get it over with. Yes, we know, you want to be like your brothers, yes you hate being a princess and blababa, we know. Do something about it, show people that even a girl can be awesome. Don’t care about the consequences for once. Instead it is all hush hush and not much happens, except her magically finding allies in her ways of thinking. And even those people like to keep it hush hush. sighs

And I was really looking forward to Darling, as I really liked her from what I read about her in the other books. I like princesses, especially if they like to kick some ass. And Darling did that in quite a few ways, but again, her constant whining and not acting was a bit boring.

Also how did no one notice it was her instead of her brother? Why didn’t anyone question it? It was just a bit too easily convenient for the plot and while it was fun at first, it was just getting a bit lame after a while.

It was fun to see the other characters again, I do kind of miss them and I hope we will get a new book with them again. Or with all of them together doing something Rebel-like for once.

Would I recommend this book? On the one hand, yes. But on the other hand, no. As it does get repetitive and a bit boring.