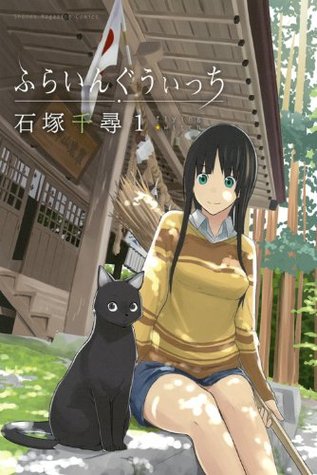 Yesterday while browsing one of the many anime/manga newssites I frequent, I saw the news that this manga would be getting an anime adaptation soon. Of course I was curious, the art looked really cute, and the story sounded really fun. So today I decided to check it out.

So what did I think of this manga? It was pretty fun, though I had expected more comedy and more action, and also more magic. For now I think the best is to call this a very easygoing slice of life about a young witch girl moving in to live with her relatives and her being amazed at a lot of things. (She is from another part of the country, so a lot of stuff is new.) And also about her learning to be a witch. So, just a warning to all, if you expect a manga about a girl doing all kinds of magical stuff and has adventures, then turn away and find another one. This isn’t the one for you then.

It took me a while to settle into the story and get used to the girl. She is quite the ditz, getting lost everywhere, doing random stuff that startles people, but she is also a kind girl who is happy and who tries her best to become a witch. Throughout the manga we get several “lessons”, for instance in the first one she needs a new broom, but we also have chapters about her familiar (a cute cat named Shade), or about her going to make her own veggie garden (and the hilarious stuff that happen there). It is a really relaxing and calm manga, great for people who just need to get away from everything.

The art is pretty decent, while the characters are a bit plain, the backgrounds really make up for it. The art also reminds me a bit of Azumanga Daioh/Yotsuba and Minami-ke, not the same authors, but it does look quite a bit alike. Which isn’t bad, I love Azumanga/Yotsuba and Minami-ke’s style. 🙂

Would I recommend this volume? Yes, I would. It is a fun, relaxing manga, perfect if you just need to get away from the hecticness of real life.