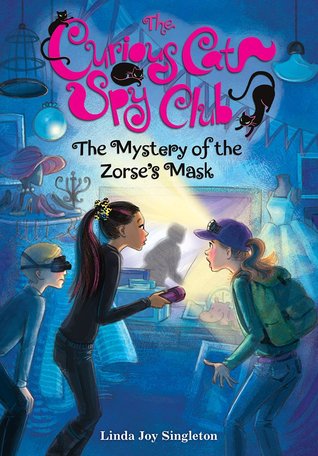 Received this book from Netgalley/publisher in exchange of an honest review.

It wasn’t long after I requested and got approved for this one that I found this was the second book. And while the book is mostly readable without much knowledge of the previous book, I still had a hard time to read it. And I was often confused, over the relationships between the characters, about the characters themselves, and mostly about what happened to the zorse (we do get some information, but it still feels like you missed something important).

The book was also a bit boring at times, it feels like the book could easily been a bit shorter if some stuff was left out. Now it feels like it was stretched out (like taffy) and made longer than necessary.

The mystery was fun, and Zed was real fun, I heard about zorses and saw images, but never seen one in real life, I think it is an original creature to have in books, most would just go for a basic/normal one, like a horse or a dog.
But the mystery was also too easy. I knew what Caleb was up to from the first time we saw him, I just knew his plans. Too many hints and it was just too obvious. Maybe little kids won’t notice it immediately, but since I am an adult, it just stood out too much.
Which is a shame, I love detective stories, and often Middle Grade ones, and while some also have an obvious criminal, a lot don’t. And I love those that don’t make it so easy, so obvious. I like to think and try to figure out who did it. Not know it instantly and just have to wait forever for other people to pick up on this. Sometimes the main characters do have an idea who the criminal is, but it takes them ages to uncover him/find clues about him.

Then we have the relationships between our characters. I was very confused about Becca and Kesley. They seemed great friends and I thought that, even though they hide their friendship at school, they were best friends. However, during one part in the book we see Kesley thinking of Becca as her best friend and immediately dismissing that fact. It was highly confusing, and I was also thinking why they couldn’t be friends? Sure, I could see some reasons, but sorry, it seemed silly that they can’t be honest with each other apparently.

Leo was a highly annoying character for various reasons. I could see why Kelsey and Becca were friends, but I couldn’t see how they could stand to be with him and his “smart” remarks. For instance, something like this was said: “He means miles. Distance is in miles, not hours.” rolls eyes

Then we also have someone named Frankie who has no use but being a creepy stalker and a liar. But apparently Leo likes him, so it is ok….

Then we also have the whole Sparkle club thingie and their booth. From what I could read, that one is still open, and it annoyed me, couldn’t they have decided on something at least? I am not planning to read the third book, and I was curious about what they would pick. 🙁 Or maybe they just didn’t care about it any more.

All in all, I was really looking forward to this book, like I said I do love MG detective/spy books, but this one was a disappointment.