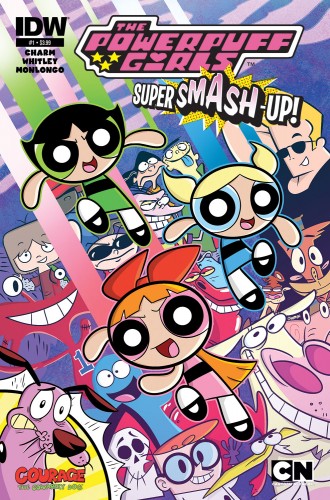 This was a great and fun book, and it is kind of a sequel to the Super Secret Crisis War. You can read them separately, but you might be confused as to how the girls know Dexter, and what happened that he granted them a tour through his laboratory (something he doesn’t do for just everyone).

Most of the book took place in Townsville, but you can also find the girls on their quest to find DeeDee in the Cow & Chicken world, Foster’s Home for Imaginary Friends world, Courage the Cowardly Dog world and various others, there are also other worlds that we don’t visit, but which we do see pop up. While the story seems a bit random at times, it is all connected to one thing: DeeDee’s rampage and that thanks to her the Dimensions are shifting. Though the later part also focusses on something different, which was nice. I was thinking it would end when they found DeeDee, but there is a little twist (well… twist? I think most can see it coming) at the end. Really appreciated, especially considering this story mostly took place in Townsville.

Most of the book was a big nostalgia trip, however I never really cared about Foster’s Home for Imaginary Friends and I don’t know anything about that camp (not sure what the name was) world. But for most I was delighted to see old characters come to life again. Only on the one hand, I was delighted to see all these worlds, but on the other hand, I would have liked to see Bravo or the Eds.
My favourite world? Courage! I loved that cartoon (even though it was highly weird) and I was happy to see Courage being Courage again. Scared about everything (and with good reason) as always.

The story was really fun and I was just cheering for the girls (and Dexter and the Professor) to find DeeDee. It was hilarious to see everyone’s reaction to the girls, especially since they fly/float and generally people don’t just do that.

The art is really colourful and fun, and it really captures the characters as I know them. I don’t know the illustrators (most sites just seem to list Various), but they did a great job.

I do hope we will get another book in this “series”, since I just love all the cross-overs that are happening in this series. Also I am really delighted that this one was way better than the first one, I was kind of worried I would also not like this one, but thankfully, this one was actually quite good.

I would recommend this one to people, kids will like it, and I am sure adults like me will love it for the nostalgia it brings.