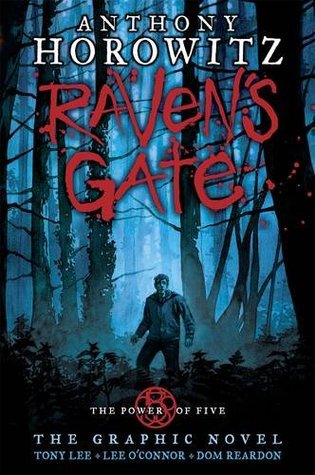 When I saw this one (and the second book) at the library I just knew I had to get them. I knew that I read some of the books of this series many years ago and that I really liked them. And I also love graphic novels so I just had to try this one out.

Sadly, while the story is good (as expected), it flows all correctly (sometimes graphic novels shorten stuff/get rid of stuff and it might get confusing), the characters are interesting, the art just plain sucked. I am sorry to say this, but I just hated the art in here and I have to deduct stars for it. At times it was hard to see characters or background, at times people just looked like zombies or monsters straight out of a nightmare. Maybe some people will like this style of lots of shading, lots of crude lines, but I am just not the girl for it. For instance that medium woman? Instead of looking blind, she looked like a zombie about to eat some nomnom Matt breakfast. It just creeped me out too much. Matt himself? At times he looks like a man made out of blocks, at times he looks like a child, at times he looks like a teenager and at times I didn’t know what I was looking at. Often people looked like something risen from some kind of nuclear apocalypse (with zombies), other times they looked like pandas (who thought it was a good idea to shade the eyes dark all around?) It is a real shame, graphic novels do rely on their art (hence, graphic novels and not novels).

But the story is great (as like I said, is expected) and I was delighted to read about Matt again. The first part of the graphic novel was (even with the time that passed) still familiar, but luckily the ending was not. The story was really creepy, old ladies who will kill anyone standing in their way, a whole creepy village of doom and much much more. It was really interesting to see Matt find out about his past, find out about what he was, and to see him fight. Of course, Matt was a typical teenager. Often not wanting to do stuff, often complaining and whining. Though I can slightly understand that, being forced to work, no one believing you, having all kind of scary stuff happening, anyone would complain or say “Thanks, but no thanks.”, so Matt was a really good character, and I hope we will see him in the next one again (I am guessing yes, considering the ending, but it has been a long long time since I read the books).

The deaths that happened in the book were really overkill, and it was a bit icky to see these in full graphic mode (especially in the style of this graphic novel).

Would I recommend this book? Not really sure. On the one hand it has a lot of greatness, but the art, the art just sucks, so I think I will just pick the safe road and say that people should read the books, and not this graphic novel.