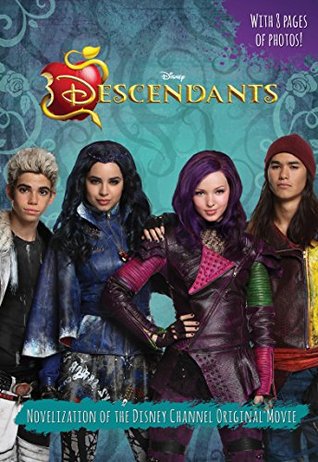 Just to clarify, I never watched the movie, nor have I ever heard of a movie about the Descendants.

I almost didn’t want to read the book, as the cover for this one is just terrible and horrendous, and it doesn’t make me want to read the book, nor (when I found out) watch the movie. Yes,  I am still a cover lover, and covers need to attract me. But I decided for once to just go for the blurb and check it out, and I am glad I did as the story was fantastic.

Welcome to a world where Good and Evil are separated. Good is on one side in Auradon, and the Evil is all locked up on the Isle of Lost. I was kind of confused about this happening, but luckily we get a quick rundown on the situation and it quickly became clear what happened.

I thought the idea of getting the kids of the worst villains all time to a prep school was hilarious, what could possibly go wrong? I mean, you ask the kid of Maleficent, the kid of the Evil Queen, the kid of Cruella de Ville and lastly the kid of Jafar, to just go to a peaceful kingdom? What did you expect, happiness and unicorns? These kids have had a lifetime of evil, with parents drilling them in the art of it. It was really fun to see them get thrown in a country with so much goodness.

The ex-supervillains, it was delighted to see them all, though I was disappointed with how they acted and how stuck they were in their ways. Jafar was the only one who I wasn’t surprised by. I had a feeling that he would be like this since he was quite useless in the Alladin movie. J

But seeing Cruella de Ville being totally unstable and hugging some kind of plushie/keychain, seeing the Evil Queen all like that, Maleficent still being a bitch but just without too much powers so she was kind of lame. And even with all this happening, they still wanted to take revenge, they still wanted to be evil. Oh well, guess supervillains just never learn. Especially since they decide that their kids going to school will be a brilliant time to do something for them. I won’t say what, just read the book, but I was laughing quite a bit. Even stuck they never learn. J Evil through and through.

I am also kind of confused, so the Isle of Lost is the place to dump all the evil stuff, and yet there is a difference between evil evil and evil? As in the book quite often people that live in the village are just called villagers and then there is a separate part of the others like Maleficent? I know that Maleficent and some other are like the uber evil, but seriously, it just made me wonder what the villagers did. They must be evil, otherwise they wouldn’t have been transported to this land, but apparently they aren’t that evil that deserve a better role in life.

I did like that at times we had big capslock parts (at least on my ereader it was in big caps) where Mal (I am guessing it was her) would talk to us. Telling us more than often how hilarious this all was and she was making fun off a lot of things. It was fun and it gave the book the extra dimension it really needed.

Our actual main character is Mal, but we also see the POV of all the other characters. Which at times it was a bit annoying as it jumped around from one to another, but luckily I felt that the characters had their own independent voices and you could easily read who is who when their part popped up.

At first I didn’t particularly like our characters, they felt like carbon copies of their parents. Rude, bad, horrible and more, but as the book goes on you can just see the differences, and you can see the characters develop and change. The change was especially fun to see. I won’t say much more, but I am sure others will also be delighted to see this.

I hated the good guys and their judging. For a couple of good guys they sure had a big attitude towards the evil side. Even if these are the next generation and haven’t done anything wrong. I hate that, people who judge on what your parents have done. Sure, Maleficent is a bitch, but that doesn’t mean Mal will be the same. That doesn’t mean Jay is going to be like his mom. I was just flabbergasted at this, seriously, this is the good side? Even more stuffed with prejudices and stereotypes than the evil side? Wth. No thank you, I will just stick to the evil side.

The ending was a stereotypical ending to this kind of book. I knew what was going to happen from the moment the kids got to the school. Still it was a good, no great, ending and I really loved it. Yay for the kids!

At the end of the book we apparently have some photographs of the movie/series? And it just made me snort so hard. It reminds me of those tv-shows you had back in 90’s, early 00’s (things like The Tribe).  The clothes, the hair, the make-up, everything. It is hilarious, we are now in 2015, but apparently nothing changed.

But all in all, I still had fun reading this short book. 🙂