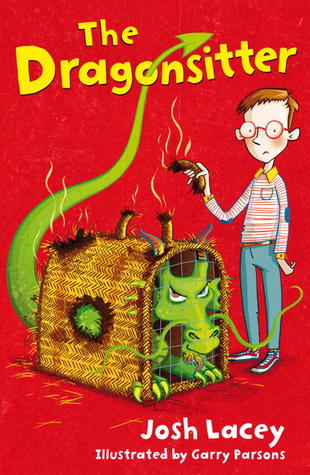 This was a fun book, though I have to also say, it became a bit repetitive.

Most of this book is about Uncle Morton’s dragon who is staying at Edward’s place while Uncle Morton is on vacation. However the dragon isn’t that kind or friendly, and repeated mails to his uncle regarding the dragon go unanswered and after a while I just got tired of the dragon who just didn’t seem to do anything. Well, nothing, he pooped, he burned stuff, he broke stuff, he chased cats and so much more. It amazes me there was still a house after everything they went through, and that they were still wanted in the neighbourhood.

And then we have the magical solution to all your problems. I won’t say what, but I was just rolling my eyes at the easy convenience of it all. I know, I know, it is a kids book, but that doesn’t need to be an excuse for it to be this simple.

I did like that the book was written in emails, instead of the normal way of narrating we have a email a day to Morton, detailing what happened that day and what the dragon did. Nearing the end we finally have the mysterious uncle emailing back. Though it was a bit strange that he never could have thought to check his mail. I mean, you leave your DRAGON with your family and you don’t care to check your mail to see if they have any questions? Or that they need help?

I felt sorry for Edward’s sister, losing her pet bunny like that. 🙁

Also what is up with the responses of people when they are called about a dragon? I know dragons are rare, but seriously, apparently not so rare if someone has them and even says there are more of them. Why didn’t they even care to take a look? Just pass by, if it is nothing, then it is nothing and you just go back to work, otherwise you have a fun meeting with a big dragon. I can imagine that if dragons are normally not kept as pets it might be a bit weird, but in this case, apparently there is someone (and probably more people) keeping these as a pet.
Maybe just me, but I just thought it weird.

Also what is Uncle Morton’s job? He got money, he got a dragon, he got everything. I am kind of curious about what he does.

There are also illustrations and I have to say that they were really fun to look at. They made the book come alive more and also made sure that I kept on reading to find out what would happen to the dragon.

Would I recommend this book? Mm, tricky, on the one hand this was a fun book and I had some laughs. I also enjoyed looking at the illustrations. But on the other hand, it was repetitive, the solution was a bit too easy, and not much is explained.