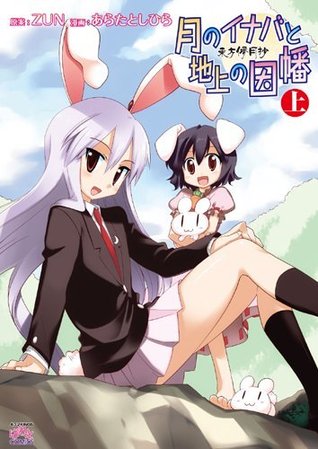 2.5 stars. Review for the first two volumes. Tewi got seriously on my nerves. I already didn’t like her, but after this manga? I hate her. Reisen was just weak and acting less like the kick-ass bunny girl I know and more like a slave. Also her being afraid and her getting punished all the time got annoying. The princess (Kaguya), urgh. :\

I was really looking forward to this series, I am a big fan of Reisen, I love how kick-ass she is. But sadly in this series? She is a wuss, she is weak, gets beaten up regularly (if not by her boss, then by others), she is easily scared, she falls for almost everything Tewi does and so so much more. I just didn’t recognize the Reisen I knew, and love, in this one. And that just plain sucks.

Add to that that two characters I already didn’t like a lot (Tewi and Kaguya) were absolutely horrendous in this one. Tewi is a total bitch, trying to undermine anyone and everyone, but first and foremost Reisen. And sorry, but after 5 chapters of this 4-koma, I just wanted to make bunny stew out of Tewi and then feed it to my worst enemies. And then I still wanted to keep trying, hoping that Tewi would change, but sorry, she doesn’t. If anything it seems her life mission is to ruin lives and make everything a living hell for everyone. I was so frustrated with how this character turned out to be in this manga. Tewi normally is already quite bleh, but come on, this series makes her an even bigger bitch.

Then we have Kaguya. Gosh, we know you are a princess, is it now totally necessary to actually act like that? I used to kind of like her (she had some awesome spells and she looked quite awesome), but after this one? Sorry, I hate the princess type that can’t fend for themselves and that keep complaining about everything. OMG, I got bitten by a mosquito, let me make a huge drama out of it. Oh I want this and that, and I want it now. sigh and rolls eyes

Eirin, Eirin, what happened to you? I don’t recall you being so vile and evil. I don’t recognize you as being such a bitch. What is wrong with you?
I really got tired of her constantly bullying and also at times torturing Reisen, at first it was a bit silly and I was shaking my head, but after a while I wondered why Reisen was still there. Why Reisen was still alive. Eirin is a horrible master.

This manga is 4koma style, so the chapters are short, and the stories are often quickly dealt with, though they sometimes continue or return at a later time.

We also meet various fun characters from the Touhou world and I was happy to see them, they are mostly the reason why I continued with this series. That, and it was short, and I did want to finish it.

Would I recommend this manga? No. It has some fun moments, but generally it ruined characters for me. And I hate it when books/manga/movies/etc. do this.