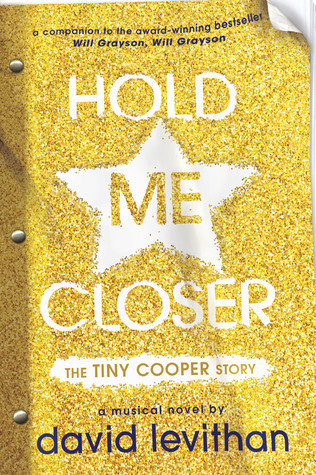 Not really that good. Way too much over the top, the songs were lame and Tiny was just annoying.

Normally I would avoid books by this author (since so far I haven’t found one book that I liked from this author (and I tried most of them)), but I needed a book for the Copycat Challenge at my group, and after a failed first attempt at a book, I decided on this one. And Dear Lord, my head hurts now.

Maybe it is because of the writing style, maybe it is because I am not a musical girl (for various reasons, like pricing and the fact everything gets Dutchified (which makes it sound horrendous)), or maybe because Tiny was just too much. I don’t mind gay characters, I don’t mind people being gay, so let me just get that out of the way, just in case people will start to rant about me discriminating or that I hate gays. I don’t hate them, not at all.
It was just that Tiny was overly annoying, too much there, too much trying to hard, too much drama and he just didn’t feel real, not at all. If anything, I felt sorry for his exes at times. Some exes were indeed dicks, but a lot of them is just because of Tiny. Tiny who is just too much there. Can’t he ever be normal? Just talk normally? Instead of this overly exaggerated way? (Which felt very fake.)
I felt like I was reading a comedy, with a hint of tragedy, and I don’t think the book is meant as a comedy.

All the songs just gave me a headache. Not only because their over 9000 level of lameness, but also for other reasons.

I did like the format, and that is why I also wanting to read the book. It is an interesting format, instead of talking and everything is normal, this book is written like it is meant for a stage. With directions, songs, notes and so much more. That is the reason why the book has a 2 star instead of the 1 star I actually wanted to give it.

Also what was up with that Oscar Wilde ghost thing? I just skipped those parts in the end, because sorry, it just felt weird and out of place. And come on, the ghost of Oscar Wilde giving life and dating advice? Dear Lord, no.

I was worried that I wouldn’t get the book, or didn’t understand a lot of the situation (as I didn’t read the other book), but I think you can read this one fine without knowledge of the other book. I didn’t once feel confused about what happened in this book.

All in all, would I recommend this book? Haha, no. I would not. If you want a book about a gay boy finding out about life and all there is to it, there are other books that are way better.