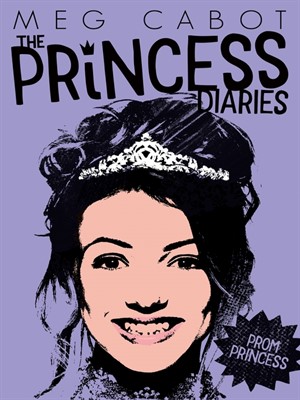 After a disastrous 4th book, I was really worried about this series. Worried that it would just turn out to be all like this. And I didn’t want that, so I went into this book with worry and I was looking at with different eyes.

Thankfully the book turned out to be great, a lot of fun and Mia was mostly doable in this one. Still a bit weird, still a bit strange, still a bit annoying, but I saw another girl as well. She is really growing up, she starting to see more of the world, starting to tell her opinion more clearly.
But, something that was a bit annoying was the prom stuff. On the one hand it was cute, but on the other hand, was it really necessary to have it going on and on for like 200+ pages? Can’t she just have told him quicker, couldn’t she have done something else?

Her relationship with Michael is really cute and I love them together. I am also happy that the book doesn’t shy away from talking about bases, and about Mia’s questions about second bases and such. However, at times, especially with how Mia acts (not always like a 15 year old), it felt also weird. At times Mia felt like she was more like 12/13, while Michael stayed the same age for me, so yeah. Awkward.
But still, I feel that these 2 will be together for a long long time to come, they are truly a great match, and I hope that Meg Cabot won’t shy away from further topics, as I feel that it is what makes this series so great. That she dares to talk about stuff like this, and it also makes Mia seem more realistic. After all what girl of her age doesn’t think about stuff like that.

Michael, while I did like him in the previous books, I didn’t always like him in this. That he didn’t have a clue what Mia would like, that he was so stand-offish about prom and didn’t get that he hurt Mia in the process. That he wouldn’t even let his prejudices go away for her, for the girl he apparently loves.
But he was also sweet, and I loved him at the end and what he did there. Not everyone dares to speak up like that, so I applaud him for doing that.

We also have 3 special events happening in this book. Mia’s birthday (and the disaster that that was), the birth of Mia’s sibling, and the prom. I won’t say if it is a brother or sister, you will just have to read the book to find out, but I was delighted with the name they picked.

Grandmere, still one of the characters I truly hate the most. At times she has some sweet moments, but mostly she is just so annoying and apparently thinks she is above everyone and everything and I hate that kind of attitude. She should see that she is only hurting people, that she is only being a bitch.

The last thing that I want to address in my review is Lily. I always didn’t particularly like Lily. I don’t mind strong-willed, strong-minded characters, but Lily? Lily is just a bitch. Lily is just annoying. And what she did in this book? I am not one to call someone a slut immediately, but sorry, with what she did in this book? For once I will let my resolution go. What a slut. What a bitch move to do. Seriously, what the hell is wrong with you. And then that ending part? Convenient amnesia is what I would call it. This is not how relationships work, this is not what you do. But then again, it is not the first time that Lily can’t see more than 2 centimetres in front of her, and if something makes her look bad (even if it is the truth) she will just ignore it or make up something totally different. This behaviour is disgusting. I hope that Lily will soon grow up out of this horrendous behaviour. I truly can’t see how she and Mia are friends. Often she chews out Mia, instead of helping she says harsh and mean things, and while I am guessing that Lily will always be Mia’s friend, I hope that Mia will go to Tina or Shameeka more in the future, and that she will just let Lily alone.

All in all though, this was a good part in the series, and I am delighted it wasn’t as bad as I thought it would be! 😀

I can’t wait until January when book 6 and 7 come out (no clue why all of the sudden there is like 4 months between the books (this one, the 4th book, the 2nd and 3rd, and the first one all came out from July to August, and now we have to wait so long?)).