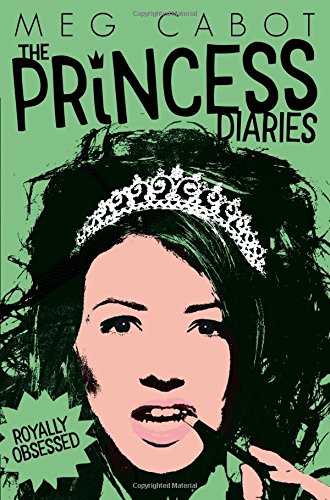 1.5 stars, this was the worst (as of now at least) part in the Princess Diaries series. Of course, I will still continue this series as it comes out (in the re-released covers thing), but I do hope they will be way better than this crap.

This won’t be a long review, I just want to throw out my frustrations regarding this book.

Let me start that I was completely, and utterly confused at the beginning of the book. Normally everything, and anything is mentioned to great details, but in this one, suddenly Mia has had her speech, her vacation is really far in, and some other stuff. I was like, wait, what? When did she do her speech? Did I miss something? What happened? I grabbed my copy of the previous book, flipped to the last part, and indeed saw that the whole speech thing, the whole Genovia vacation was practically skipped. No wonder I was confused.

Normally Mia is already on the border of being slightly annoying, slightly whiny and a bit weird, but it felt like the dial was upped to over 9000 in this book. Seriously, what is wrong with that girl? She kept whining about everything and anything, about nature (but this is quite natural to her, though it is getting a bit tiring, I don’t mind people giving their opinion, but this feels so shoved in ones throat it isn’t even funny any more), about feminism (urgh, that just gets old), about herself (sooooooo much), and now of course we also have Michael. sighs
I know this girl is 14, but she acts more like a 10 year old.
Instead of just thinking logically, she listened to her Grandmere (whom she hates/disliked), let her life be decided by others, and thus almost ruined things with Michael. I mean, how hard is it to just let a boy know that you probably can’t go on the date on Friday? Or tell him you like him?
Ah, and that brings me back to another thing, seriously, she is 14? Why is she proclaiming her never-ending love for a boy? At that age I was happy that a guy liked me, but did I want him forever? Um, no. No thank you. So it was kind of weird, and creepy that both Mia and Michael were all professing their love to each other, practically acting like it would be forever and ever.

Luckily Mia’s annoying friend Lily kept her trap shut for most of the book. Still we get some stupid situations with this girl, and I will stick to wondering on how these 2 are friends.

Normally there are various things happening in Mia’s world, and a lot of them are interesting, but this book was just horrendous. Nothing happened but whining, whining and more whining. And I keep wondering why Mia keeps falling for the tricks of her horrendous grandmother.

All in all, I wouldn’t recommend this book to anyone. Sadly, probably for continuity, you need to read this one. Though, I guess, you could also just skip it. Not like anything good happened in this book.