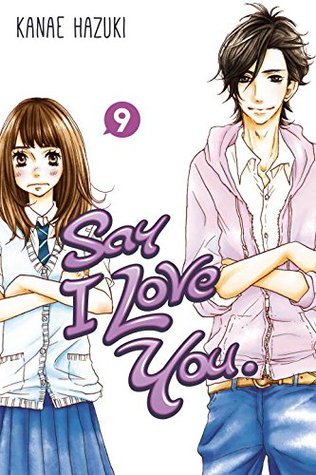 A gorgeous volume of Say I Love You, however, I still miss Yamato x Mei.

I am reading this series for them, and while I still like most of the other characters, I still wish there would be more Yamato and Mei. They are the main main characters and are on the cover, and I truly wish they would get more time to tell their story, their relationship is still a bit rocky (mostly due to Mei being insecure) (and yes, even after so many volumes, but I mostly blame the fact that they don’t get enough time in the spotlight, they just can’t develop).

The first part of the manga is about the date that Yamato has to do due to the contest thing from the last volume. Megumi was once again just pathetic, seriously girl, after all this time you still don’t get the freaking hint that he is not into you? That he will never be into you? That he will only like Mei until, well, a long time? Hello? Are you an idiot? Just go away, be a bitch somewhere else. Thankfully after that date (which was just plain painful) she finally got the hint, and I do hope that she will stop bother both Yamato and Mei and just starts focussing on getting someone else. Though with her attitude towards people… I dare to bet she will end up all alone. Unless of course she changes her ways, but this is Megumi, and I don’t see her do that.

Daichi’s story is the main part of the manga. We find out about him, about his past, about how he feels about Kyoko (dear Lord that girl doesn’t know when to stop drinking or complaining/whining, does she?). Daichi is a great character and it was really interesting to find out about his past. The poor guy, I can imagine that such an event would break him, it would break anyone. I hope he is able to move on now, that he can live his life again, without all the guilt that he has/had.

Like I said, I didn’t like Kyoko much. She was a bit too desperate, a bit too whiny and I just wish she was different. Now instead of cheering for her, and for Daichi, I was just hoping that she would be rejected some more.

There were still some parts with Yamato x Mei, and I just loved them. Yamato especially was super sweet with the things he said about Mei. Ah, that guy really loves her so much.

The art is still gorgeous and I truly love it, though again, like I said in previous books, it just feels weird to have them talk about body issues and have gorgeous (and a bit too thin) bodies.

I am glad I finally got this volume (there were some problems with Amazon and it took ages for this book to come in (after it went missing at first, got cancelled later and then some other stuff)), and I can’t wait for the next volume (hopefully that one will get in without problems when it comes out).