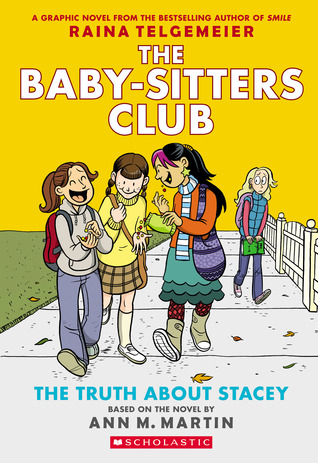 Wow, this one was chock-full of stuff. I really love seeing the BSC books come to live with these graphic novels. I hope there will be several more, well maybe not the whole series (as there are so many books), but maybe a few of the special ones.

This time Stacey is the main character and it was so interesting to see things from her POV. Don’t get me wrong, Kristy is an amazing character and I really liked her, but Stacey is just a bit different. Both of the girls have had their share of problems in their lives, but I think Stacey has had the biggest problem, and still has that problem. Her diabetes and how it changed her life. From a girl who could eat, drink and do anything, to a girl who has to take shots, keep an eye on what she eats, how much she eats and on her exercise, it is quite a change for an 12-year old girl. She also had to move, she lost a best friend.
Quite a bit of the book is about Stacey’s life with diabetes, we also find out what happened to her in her old city, and what happened to her friend. But we also see how her parents treat her, and while I can understand that the parents act like this, I wish they would also have listened to Stacey better. Made sure she was also comfortable with all the doctors, with all the diets. I know, Stacey is 12, and the parents have custody and all that jazz, but really, something big as this, something that impacts a life of anyone so much, I just wish the parents would look up, see that their daughter is a human being with wishes and hopes, and not just something to drag around and try to get fixed.
Stacey is really a wonderful character, and I just loved the latter parts of the book, where she goes back to her old city to visit a doctor, but also meets a friend, and what happens there, well you will have to read the book, but I can guarantee you, it is just something that made me cheer and made me so happy.

The other thing that is going on in this volume is the fact that our babysitters have competition. There is a new babysitters group in town, and they will do anything to get rid of our babysitter group. I really despised those girls. They didn’t even want to truly babysit, they just wanted money and probably to also just be best in stuff. Using their older ages as an advantage (though again, these are 13/14 year old kids I am guessing? Why are they able to stay up so late? Sorry, but when I was that age, I couldn’t just stay out until 11 or midnight, or even later. I just had to be home early, get to bed on time. I am amazed, and also a bit worried.
But the whole competition and how dirty they played the stuff, wasn’t the only reason I didn’t like this group. They also treated the kids horrendously. Not watching them properly (look what almost happened to Jamie), not caring about allergies or interests of the kids. And that those parents just trusted them like that. Not even once noticing that their kids were sad or not all to happy with stuff.

Kristy had some great ideas though, and I loved the ending of this. How it was solved, it was fantastic and I am happy it ended this way.

The art is of course amazing, as expected since it is by Raina Telgemeier (one of my favourite artists). She really has a knack of bringing out the characters, bringing the story to life and so much more. You will just be dragged in the story and it won’t let you go until the very end! One thing I didn’t entirely like though was the fact that the characters look way older than they are. These are 12 to 13 year old girls, yet they look older. And every time they said their ages, I had to double-check to make sure they were right.

All in all, I would highly recommend this graphic novel to everyone! Be sure to also check the first one out.

As for me? I will be waiting for the third volume of this one, and hoping that there will be many more to follow!