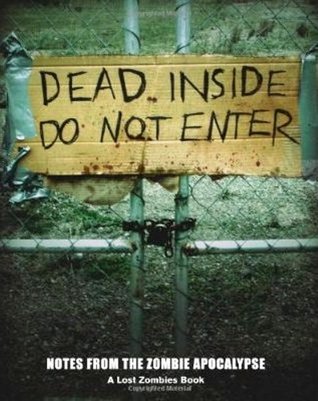 4.5 stars. Wow, this was a stunning book, absolutely creepy and the perfect read for the Halloween season.

This book consists out of photographs of letters, cards, posters, anything that people wrote on before and during the zombie apocalypse. At the beginning of the book we also have a timeline with some basic information so we know how the world ended in this book. How it started with a flu and how it ended in people just, well, eating each other. It is nothing new that zombie apocalypses start by a new strain of flu, there are several books that feature this, but it is always interesting to see how it is executed. And I have to say this book? It did it perfectly.

The stuff written is sometimes short, sometimes very long. I have to say that the short ones gave me more goosebumps than the longer letters. The pure desperateness that just flows out of those short messages, the pure fear that made them so short, the fact that you just know that these people didn’t make it, or are now alone, still searching for the people they love. Still fighting out there.

Several of the letters also have blood on them, and that really adds to the scary factor the book has.

Throughout the book I had goosebumps all over me, and I just felt afraid, but also sad, because some of these notes are ones were people are looking for their loved ones, or confess that they did something. There were also letters of people who knew they would turn, who knew they would change into those monsters.

I also liked that we went from good (there is a flu, and yes it is creepy) to bad (OMG ZOMBIES!).

The only reason why I didn’t give this book a 5 star was because of 2 things. One, sometimes I just couldn’t decipher what was written. I can imagine that they wanted diversity in how the notes looked, but I feel that it failed. Diversity is nice, and I can imagine that people are rushing to write, but I wish I could just read them. Because now? Sometimes I just couldn’t. And I just gave up and went to the next one.
The second one, and I can slightly forgive that one, as you are in a zombie apocalypse, but some were also from before, the fact the grammar and spelling at times just lacked. I noticed some words and I was just wondering how anyone would get those wrong.

But those 2 points are really the only ones that I thought weren’t right. The rest of this book is a rollercoaster of fear and creepiness. And believe me, you will be looking over your shoulder while reading.

I hope there will be more books like this. More of those books about notes, and letters and just let those speak for themselves.

Would I recommend this book? Heck yes! If you are a zombie fan, or just looking for a nerve-wrecking and creepy book, I would say try this one out!