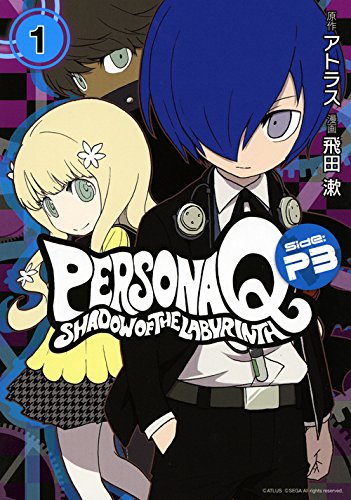 I absolutely adore Persona, I played several of the games, watched the newest movies, and I am excited for the new movie to come out. So I thought while waiting, I would start reading this one, and boy, am I glad I did.

Persona meets Alice in Wonderland, that is the best I can describe this hilarious manga. Our heroes end up stuck in some sort of magical place due to a malfunction in the velvet room (elevator). They enter a labyrinth which is pretty much Alice in Wonderland. It was delightful to see the maze, to see the FOE painting the roses, and then to meet the queen.

Because next to a different setting (normally we have Shadows and Tartarus) we also have 2 new characters Rei and Zen. We don’t know much about them, they are just there when our heroes land in this new world and apparently they have lost their memories, which sparks the curiosity in me even more. Are they truly good, have they really lost their memories? Or are they enemies. I am really curious to find out.

I also love that while this is done by a different artist, that the characteristics of the characters are all intact. Junpei is still an idiot and rushes into things, Yamagishi is still stoic and kind and so all the characters retain their own personalities that I grew to love in Persona 3 (game/movies). I am delighted, I was kind of worried that they might be totally different, but it was like I never left them, like I just popped up after just a mere few minutes instead of several months.

I am also delighted with what happened in the 4th chapter! Oh my, those characters! I am happy to see that we are apparently unifying the Persona worlds. I had my suspicions, given how there was also a Persona 4 labyrinth volume, but I didn’t expect them to pop up here for real. claps This makes the manga even better than it already was.

The art is pretty funny, I love how the characters look (especially those eyes). It is an art style I could see myself falling in love with.

Would I recommend this one? Yes, yes I would, especially if you are a fan.