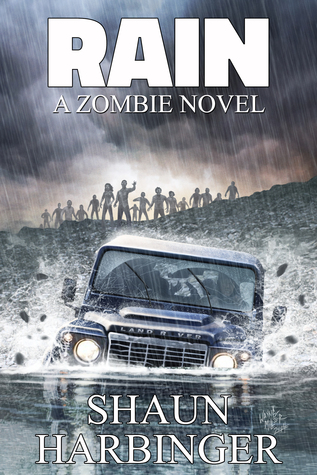 I was looking for new Halloween/zombie reads, when I stumbled upon this one. It sounded really awesome and I immediately went to get it/read it.

And I am glad I did that, sure the story wasn’t always good, the characters annoyed me at times, but in overall this was a great (and also very exciting) read that kept me on the edge of my seat for several parts. The zombies are creepy (though I kept thinking they were just evil smurfs instead of zombie zombies, which I blame on the fact they are all blue, instead of grey/brownish/black which most zombies generally are. So I had a few snickers at times, but generally these zombies scared the heck out of me, especially because of how they behaved/acted.

We have 4 characters, but there is only one main character. A guy named Alex, a gamer who loves junk food and you can see that from his body (his body and how he feels about it is something that keeps returning and returning, making it a bit annoying, as come on, we already know about this). At the start of the book he is with 2 of his friends and his crush. They were hiking up a mountain when everything in the world turned to crap.
I really liked Alex and how he tried to keep his head straight, he was always thinking, and while he was quite useless with the whole running/fleeing part, with heavy physical exercise, he was great and fantastic in the brain department.
Throughout the book he is the one who has a clear head (though of course he also makes some overhasty decisions, which I can forgive, I am sure anyone would react that way if they found out something like what Alex finds out), and he is the one who makes a lot of the decisions. Though his head/narration we also find out more about the zombies, he really keeps track of their behaviour (which has saved the friends from a few difficult situations).

My next favourite character is Lucy, followed by Elena and then Mike. I didn’t like Mike that much because of how he acted, that he was quite a dick at times towards his friend. I know your friend is pretty hopeless in this situation, but he does his best, he fights and wants to live, no need to be so mean at times about it.

Several things happen as the story progresses and I can say that I was just crying when 2 events happened. 🙁

As the story progresses I just knew that something was weird about the whole situation, but I just couldn’t grasp what. There are hints, but I think that until the next book we won’t know what happened to the world or if everything is as it seems.

The survivor camps? Well, I would rather be out in the open. I might not survive long, but I think everything is better than to be stuck in some big area with a flimsy fence just separating me from the outside world.

Also a warning; this book will suck you in and not let you go until you finish it. Believe me, I started with this book and I just had to finish it. Had to know what happened to everyone in this book.

I would really recommend this book to everyone. It is a great creepy read and Alex really improves as the story progresses.