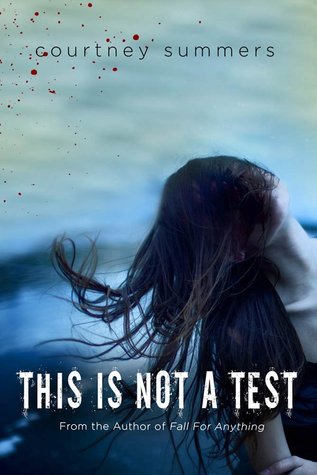 It has been 3 years since I last read this book, some stuff was still there and I remember them, but most of the book has disappeared deep in my mind. For which I am thankful, since now I could enjoy this book again!

And enjoy the book I did! It was a true rollercoaster, with characters I liked, and characters I didn’t like. Sloane, our main girl, I just loved her, though I also wanted to shake her, tell her to stop being so negative, to stop her from going back to the past every time. Sloane’s voice was a grave and solemn one. And I can imagine, her life before the zombies wasn’t the best. Her mom died, her father beat his kids. Now she is finally free of her dad, but she isn’t truly free, the world isn’t safe any more, the world died. Hope died, despair came to life. But I also wish she could look at the bright side, and yes, that is difficult in a world without hope, with fear everywhere. But she has people around her, she has a relatively safe haven, she has someone who cares about her. And yes, again, I know the world is pretty fucked up, but it could all be worse.
But, out of all the people, Sloane was the one who had her head on the right place. She tried to help people, she tried to stop the fighting, she tried so hard, and I admired her for what she did. Unlike Trace or Harrison, she at least tried to keep things together.

Rhys, ah, my second favourite character. He is just such a sweet guy, and he tries his best so much. He is also damaged from what happened during the first days of the zombie apocalypse. But, even with that, he does try to lead the group, does try to do whatever he can to keep everyone together and relatively happy.

Cary, another character I really liked. I felt sorry for him for what happened to him. For what he had to endure. He made a choice, he did something, and he is paying for it every day, sadly, several people won’t see it that way, and I just wanted to smack those people, tell them to just leave it. He made a choice, yes, it wasn’t the best one, but in a world with zombies, a world without hope, one has to do something. I can imagine why he made that choice.

Trace, gosh, he was the worst character of the book. He just was so aggressive, so possessive, so mean and so full of hatred. And yes, I can imagine why, but come on, he keeps his hatred so hot, he never once tried to maybe look at it from another angle. He never forgives Cary for he did. Not even after everything.

Grace, I am not sure what to think of her. At times I liked her, at times I just disliked her. I didn’t approve of what she does in this book, how she treats Cary.

Harrison, the only character I don’t really have an opinion on. He was there, and that was it. He never really did anything special, he was mostly invisible, and at times I just forgot he was even there.

The story was awesome, it is creepy, it is desperate, it is full of fear and it is totally fantastic. We see our group spend their days in the school, you see them fight, you see them bicker over tiny things, you see things go bad, go good, never is one day the same. There are several events happening that were quite scary and also really sad.

There is just one thing I would have liked to see, how Sloane met the group, how they got together, how they survived 7 days before they got to the school. We learn bits and pieces about what happened, but I would love a short novella about those days. Since those were the days the whole thing just started, when people were still outside and trying to survive. Quite soon in the book most people are seemingly dead and even the dead are less aggressive to get to survivors. I would love to get to know Trace and Grace’s parents more.

The ending? It was fantastic and it also broke my heart, for what happens there, for what Sloane finds, for what Rhys and Sloane and the others endure.

All in all though I would highly recommend this book to everyone! This is a book you will keep reading, that will grab you by the nose and never let you go.