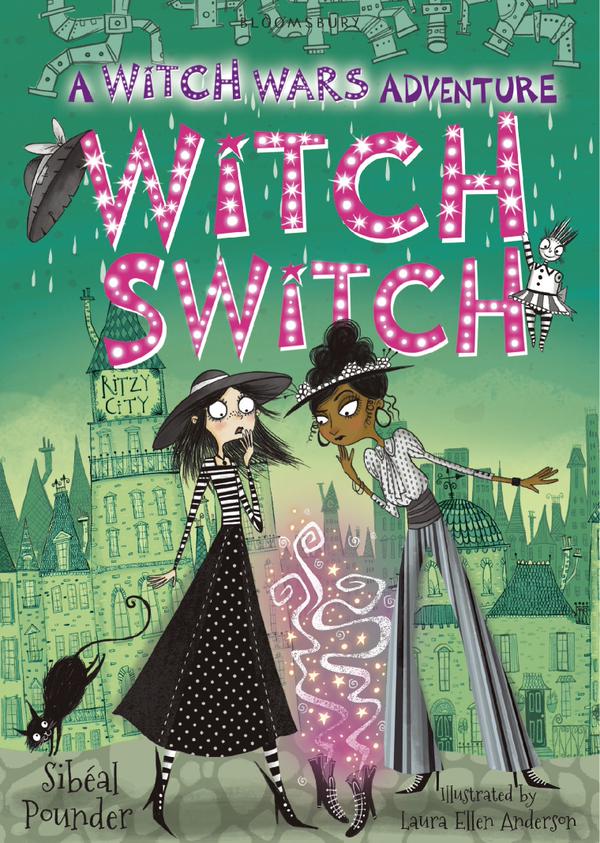 What a great book, I am so delighted that this series just keeps going, it is such a fun series.

The second book in the Witch Wars series! Though it isn’t really about the Witch Wars any more, that was book 1. This book is about Peggy going missing, about dolls, about a past that Tiga is still finding out about and a lot more.

The book begins with a vacation, but we soon get in the action when our main character and her best friend Fluffanora find out about Peggy’s mysterious disappearance and a certain annoying witch taking her place. The book has two plots, but they are connected to each other. We got the whole Peggy/Doll situation and the fact that we now have an evil witch doing the ruling stuff that Peggy is supposed to be doing, but we also have Tiga’s past. Because that is something I am still interested in. Who is Tiga’s mom/dad? Why did they leave her? And we find out several things about Tiga’s past, and her name.
Also not only that, but we also find out more about Sinkville, about the past, about various other cities in that land. It was all really interesting.

Now for the characters. Tiga was once again fantastic, and it was fun to see her practise and try out magic. She isn’t that good yet, but I am sure she will be able to become very awesome if she keeps practising. I also like her determination, and the things she did near the end! She really stood her ground there.

Fluffanora, a character I really liked in the previous book, but I didn’t really like her all the time in this one. She had some great ideas, she is a pretty good friend, but I found her so annoying and ungrateful. She gets everything she wants, can go on vacations, but is acting like it is all so terrible. And I just hate that attitude.

Fran, ah, Fran. A character that I like, but also dislike. At times I do wonder how she survived so long, she is quite oblivious to a lot, and I also don’t really like her OMG-everyone-just-has-to-love-me-tude. But I can also see that she is a great person and that she tries to help Tiga with everything.

There is just one thing that I found odd in the first book, and still find odd in this book. Apparently these characters are all 9 years old? Is that in witch years? Or human years? Because I would rather say these girls are 12 or 13 years old. Not only in how they look (just look at the cover or the illustrations, those girls just don’t scream kids), but also in how they act and react to stuff. It just doesn’t really seem that they are 9, but every time it gets mentioned I am like shaking my head and go: No, no they are not 9.

The illustrations were, once again, fantastic and I just love them so much. The outfits are just fabulous, the way various stuff like backgrounds/stores are drawn is just magical. I have really found a new illustrator to follow and keep an eye on.

Would I recommend this one? Yes, I would! It is an awesome read and you will find out that you just can’t drop this one.

As for me? I will be eagerly waiting for the third book to come out. I got it pre-ordered already and I just want 2016 to come!