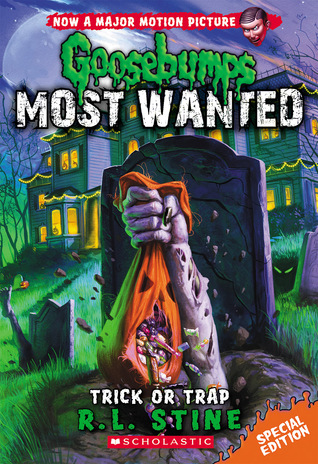 1.5 stars (1 star overall for the book, 0.5 stars for the ending). Phew, I am glad I finished this book. Though I am also really disappointed, the blurb and the cover looked really awesome, and I was just waiting for Halloween to start reading this one.

Sadly, the main character, a boy named Scott, is absolutely horrendous. Wimpy, whiny, complaining about everything, panicking about even a little thing, I just got so annoyed with him. I was hoping he would get better, and well, he kind of does, but he still so wimpy. I normally don’t really have a problem with wimpy kids in books, but Scotty, well I just felt he was overdoing things. I was even wondering if there was anything he wasn’t scared of. You don’t even want to know how many times I just rolled my eyes when Scott went running around again in fright. But I still kept reading the book, even though it seemed that Scott was even afraid of his own feet.

Why do I keep reading it then? Well, I was just curious if Scott would change, if he would get better. I also wondered if he would stand up for himself, would say no to the bullies, would say no to his sister. Also I was really interested in the story when the mask and the haunted house came into the story. Those 2 things (+ the creepy lady) really made me stuck in the book.

Because other than that? Rita sucks and is a terrible kid, the bullies are bad and I just want them to do something productive with their time, Amanda… well after that trick she did, I didn’t like her that much. The mom just cares about her job more than she does looking at her kids, and while I can understand that you might favour one kid more than the other, I still wish she would have given Rita punishments for what she did to her brother.

The ending and what happened there? Definitely an improvement and I just loved the last pages of the book. Wow, that was a nice twist and very creepy! R.L. Stine truly wrote an amazing ending.