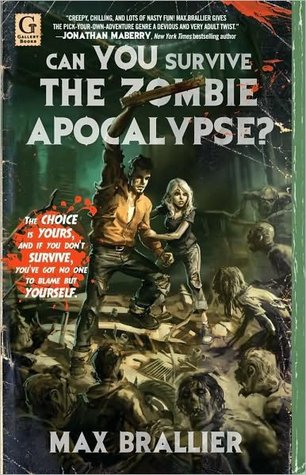 4.5 stars! This is quite the original, creative book.

You have choices to make now – lots of them. Moral dilemmas. Strategic decisions. Weapons. Vehicles. Will you be a hero? Or will you cover your own ass at all costs? Will you survive the coming hours, days, weeks, and months? Or will you die amidst the chaos and violence of a zombie uprising?
Or worse of all, will you become one of them…?
The choice is yours. And hey, if you don’t make it – you’ve got no one to blame but yourself.

I recently read another book by Max Brallier, and I wanted to know if he wrote other stuff. Thus I stumbled upon this book, I was interested, zombies are one of my favourite scary monsters, and I just loved how the cover looked (like a paperback from the 70s or 80s). But then I saw something even more awesome than zombies, even better than the cover. I saw this was an choose-your-own-adventure book! I love those! I was curious as to how it would be done, how many bad endings there were, how many good endings, how many endings were we have to fill in the dots ourselves.

But first I started reading it, I followed a route, but bumped into so many choices that I decided to make a chart. So I got my dear boyfriend, and we both started typing down all the possible endings, all the possible routes, and by Lord, it is BIG, HUGE, there are countless of routes, countless of endings. Some routes are really small and are relatively easily reached (and some of them don’t have too many sideroads), but some take ages to go through before you hit the ending of that route. The biggest one is the military-based storyline. One I kind of enjoyed, but also kind of didn’t. Yeah, I am conflicted.
So yeah, I had a chart, and I decided to read it, since I want to reach most of the stories and the endings, and while I could do it blindly, I prefer a chart so I know exactly what line I followed, and which one I didn’t.

This book is terrific. Of course the whole You did this, and You did that, took some time to get used to, but after a while you don’t even think it is weird or strange and you just get lost in the story. The story about a guy, with a dead-end job, getting lost in the zombie apocalypse. Every choice you make leads to something, death, freedom, or something else. At times I really liked the guy, at other times I just wanted to shake him around. I know, I picked the choices, but dear Lord, that guy wasn’t really the smartest even without me picking the choices.
At times I was just laughing my butt off from various situations which were just super hilarious, or silly. Or just because of puns, jokes (yes, even in the apocalypse one makes jokes).

We meet various people, depending on the choices you make. I didn’t like all the of the characters we meet, but generally we do have some great characters. I especially liked Yakuma, and Chuck. They were fantastic and they really kicked ass. Well, especially Yakuma. Stripper + swords + kick ass moves = WOW.
Yes, you heard that right. Stripper. This book isn’t for the kiddies. There is tons of gore, quite a few references to drugs and alcohol, a bit of swearing, and several other things. Now the gore can also be present in some kid/YA books, but generally those keep it quite clean.
But this book made me feel a bit sick in the stomach. Guts, intestines, heads being blown off, zombies tucking in a human.
The book also gave me a lot of goosebumps. Even though the main character wasn’t one I identify with (I am a woman for starters), with the POV we have, we were just smack dab in the middle of all the horrible stuff that happened. It was at times really gruesome, normally you can distance yourself a bit, still feeling sorry for the character of course, but you aren’t as close to the action as it was with this book.

I still got some routes to finish, some endings to find, but I did most of them. My favourites would be Yakuma, Chuck and the apartment building story.

There was another thing I didn’t like, but that didn’t have to do with the book, and more to do with my ereader. I still want to mention it though, as this is a review, and I want to mention everything.
You could click on the choices, but sadly my ereader hated doing that, often flipping out, it sometimes took quite a few tries before I could get my ereader to understand that I wanted to click a link, and not wanted it to open the menus. That was quite annoying, as I just wanted to continue the story, find out about stuff, and then my ereader would just be like: NOPE.

All in all, this is one book I would really recommend to everyone. Looking for a fun, creepy, scary book? A book in which you can decide what happens to characters, main character? Then this is one you should check out.