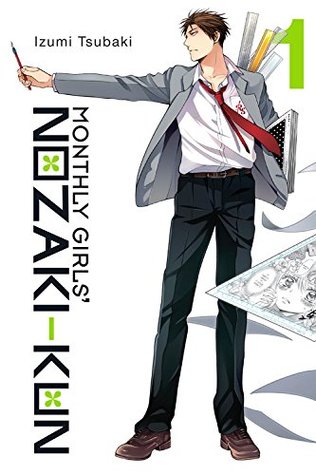 Nozaki-kun is here! In manga-format!

I watched the anime for this back when it aired, and I loved it! It had great characters, hilarious story, lots of references, and so much more! Then I heard about the manga being translated to English and I knew I just had to have it.

Now, it is finally here, and I really liked the manga. Though I have had the same problem I had with other manga that I read after I watched their anime and where the anime followed the manga closely. I just knew most of the jokes, and they fell flat now. They were still fun, but they just missed the impact they had when I first saw them.

Still I was delighted to see the characters again, to see Mikorin, Sae-chan, Sakura, our Prince and her murderous escort, and most important Nozaki-kun! Because even though Sakura is the main character, Nozaki takes a huge role. And thankfully so, as he is fantastic, silly, hilarious, brilliant, but also a huge idiot. He doesn’t see it when people don’t like him, he is at times rude, but doesn’t see it, and when he makes up situations for his manga they are often just silly things that get scrapped quite soon.
His manga is brilliant (I love how he just uses his main guy character’s head for everyone else, which causes quite a bit of confusion).

The manga is 4-koma, and I must say that it fits this series perfectly. Not always will it work, but with this one? I think if it was one long story, or chapters of stories, that the puns, the jokes, and the silly stuff would not work. That the characters wouldn’t come out right. So I am really happy with this. Though it is a bit different from normal 4-koma stuff, instead of 2 times 4 panels, this one is just 1 time 4 panels.

I really loved to read about the manga process (and we even have a part about how stuff works), and I can’t wait to read the rest of the manga to read more about how manga is made. 🙂

I also have to say that I feel sorry for Sakura, she loves Nozaki so much, and he? He doesn’t even notice. Just thinks she is a fan. I do hope that the later books will show some progress about this.

All in all, this is one manga I would recommend if you are looking for a hilarious series with an oblivious character.