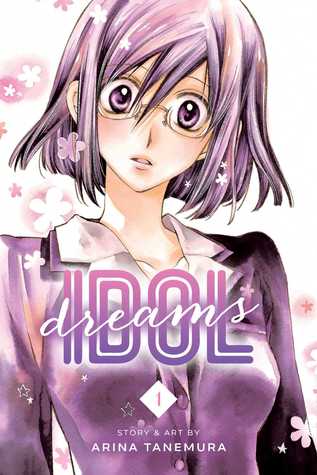 I was delighted when I found out that Arina Tanemura’s Idol Dreams would be translated to English. I love Arina Tanemura’s manga, she really has an awesome art style and a real way to write a great story.

And that is no different in this manga. This time we have a more adult character as a main, unlike most of her works which feature a teenage protagonist. But then again, our MC is still half of the time a teenager (due to the drug she takes), so in a way it balances out.

I really like our MC in this manga. Well, OK, if I am honest, I like her teenage self more than her (mostly) depressed and lived-out adult self. Her teenage self is cute, is sweet, is happy and delightful with the world, unlike the adult self who is quite gloomy and regretful about stuff. Which I can somehow relate to, but on the other side, I wish this woman would look at the bright side of life for once.

The idea of a pill which can change your age, change your appearance, was interesting, while I am pretty satisfied with my age/appearance at the moment, I wouldn’t mind going back for a bit to how I looked like when I was 15. Just to experience that again. Just for fun, and curiosity. 🙂

Of course each age self has a crush/romantic interest. Hibiki when she is a teenager, and Tokita when she is an adult. I am quite curious who she will pick in the end, or if she is going to pick. After all, she can’t always be 15, and it might be a bit of a trouble if she would pick a kid who is underage.
I am also curious how she will handle it, can she really handle two guys? While also juggling between the lives of an adult and an teenager (who is also an idol).

I can just imagine that it will be a very fun, hectic, romantic manga. I am quite curious how the idol career will be going, the pills only work for so long, so I wonder how it will be handled. Hopefully in the right way (though I can just see that there might be a few mishaps).

The art is gorgeous (as expected), I just love her style, though a lot of the characters always look like other characters from her other works. But I can forgive that as the art is just too beautiful. Characters are detailed, backgrounds are fantastic. So I am happy with that, and I can forgive something like characters looking the same way.

All in all, I can’t wait for the second volume, and I hope this one will continue for a while. I also would recommend this manga to people.