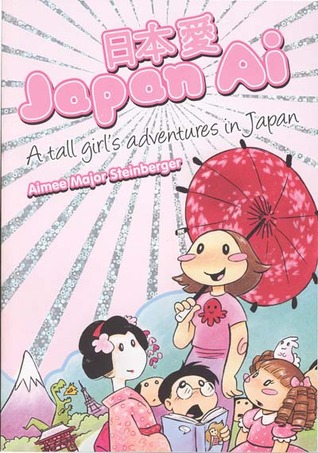 I just love books about Japan, especially those written from foreigner’s point of view, it is so interesting to see how people view Japan.

I am so glad I was able to find this one through Amazon’s marketplace (which is double lucky, as I found it for a normal price, and not the bloated price it has now). The poor book was quite mangled (it was apparently an ex-library book), but I fixed it up and gave it a loving home. As it deserves.

And my oh my, what a fantastic book this was, it is all about Aimee’s journey to Japan and what she does there. Some stuff include Volks, temples, theatre, onsen and so much more! The best thing is that, unlike a lot of books about Japan, this is about a girl and her friends and they don’t really read/speak Japanese, and this made it closer to home than other books about living/travelling to Japan. You can see them struggle at times with stuff, you see Aimee try her best at saying sentences in Japanese (+ her commentary that it isn’t the best). It also motivates and delights me, that Japan is apparently quite accessible even if you only know a bit of Japanese. I was a bit worried about that.

The book isn’t only about touristy things, or about important sights to spot, it is also about Japanese culture, about anime, about clothes (and all the various kinds of cultures that were various types of clothes), it shows us manga cafés, tells us about tattoos (and what that entails in Japan), it tells us about onsen and how those works. It is a book with a lot of information, but all told in a very fun tone.

I also loved the various parts which showcase just how big Aimee is for Japan. She doesn’t fit in chairs, toilets are small, clothes are tiny and so much more. It just had me laughing, as I could just imagine how it would go for me and my boyfriend, especially my boyfriend, I would probably be able to just be hidden, but my boyfriend is quite tall. So at times I showed him parts of the book and he could also imagine those things happening to him. 😀

The illustrations are fantastic and really fit the style of the book. Some stuff is really detailed (loved that!), while others just were less detailed (but still good and fun).

All in all, if you are looking for a fun book about Japan, about a tall girl going to Japan, then this is the book to check out! I hope others will have more luck with finding it.