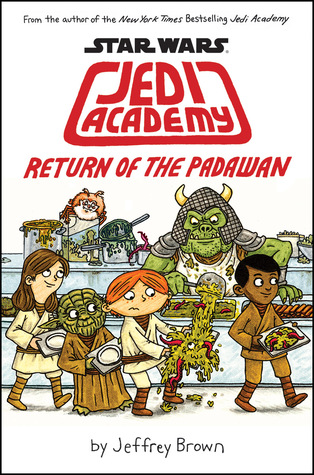 The second book, and also the second year at Jedi Academy, and I have to say I didn’t enjoy this one as much as I did the first book.

This had mostly to do with the characters. Roan’s friends were terrible in this one, Roan didn’t make some wise decisions (and went quite the wrong side at one time). I also didn’t like Mr. Garfield, what a dick. He was just basing his grades on how much he liked a student it seemed. Roan did an A+ job at a lot of stuff, but only got C’s. It was just ridiculous, and I wish someone would do something about that teacher. Luckily, Roan is still dedicated, though of course also pissed at things. Which is logical. It just sucks when your teacher doesn’t like you, or when teachers give preference to other students and ignore/give bad stuff to the others.

On to the friends. Sure, Roan wasn’t always nice, or he was quite clumsy, BUT I see another side to this too. They were quite bad as well. Pasha for leaving his best friend outside of the museum, for being angry with him after that accident, for doing several other things. Gaiana for being a bitch, sure, Roan wasn’t really tactful, but he did his best to make contact with her, to make ammends, and she brushed him off. And yes, we find out later why she is such a bitch about stuff, but sorry, did you expect him to be telepathic? I know he has the Force, but if something suckish happens in your life, don’t expect your friends to MAGICALLY know what the hell is happening in your life. If you aren’t happy about something, or something bad is happening, TALK to them. Otherwise I do have to say you have no right of being pissy towards them about stuff. 😐

Roan, he was at times quite great in this book, though well, I didn’t particularly like him in the latter parts. However, I can imagine why he went that route. I am not saying it is good, but I can see why Roan would pick that side. If everything goes wrong in your life, and suddenly people do talk to you, do act like they are friends, I can imagine you might go that side. Even if it isn’t the kindest side of all.

But the book was still packed with fun stuff, disgusting food (I wonder why anyone would eat it, can’t they make some good food for once?), letters, holobook posts, schedules, grade reports, comics and much much more. It is really a feast for the eyes, and you really can’t stop reading once you start this book.

The year seemed to fly by even faster than it did in the previous book, but maybe it is because it was such a filled year. We got all kinds of epic stuff happening, and I especially loved the lessons.

Roan’s family was still fun, though I didn’t like the older brother as much as I did in the first book. He seemed to be more occupied with girls and other stuff, than to care about his little brother.
Ollie however was once again really cute, I loved how Roan could use the force now to amaze Ollie. 🙂

All in all, even with some bad stuff, I still really enjoyed this book and I can’t wait to start with the next one.