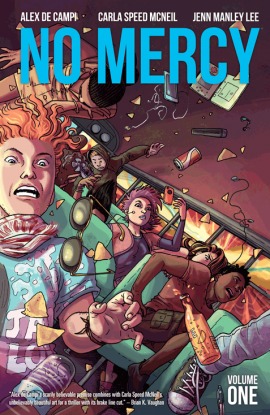 The book started off pretty great….

but around page 60/part 3, it just went downhill. Instead of sympathizing with the characters I was just shaking my head at their stupidity. I also felt like the plot was a bit confusing. Not only do we have the survivor theme, but we also have some drugs which will cause trouble. It didn’t really fit, and I was actually not looking forward to that. I came for the survivor stuff, not for the OMG drugs + mexico stuff.

The first half of the book was epic. We meet the kids, we get to see more about them (though I have to be honest, it was really obvious who survived the crash and who didn’t from when we see them in the bus) and then the poo hits the fan when the busdriver has to dodge all kinds of stuff and then crashes off a cliff.

Say hello to death, coyotes, lack of water, food, friends who are ripped from life way to fast. The pace is set really fast, and I really was sucked in the book. So much happened, so much poo hit the fan, and at times I just had to look away because it was just too much.

And then as I said came part 3, and then I just lost interest.

The characters? Well as I said, I did like them (well not all of them, what is up with that brother/sister and why are is he such a big ass towards his sister? Why does he abuse her like that?), but as the story progresses you can see their true nature, and I can tell you, they aren’t always pretty. 😐

Also a warning, don’t get too attached to the characters. The author doesn’t shy away from just killing people it seems. I know, it fits the theme, but at times I was a bit stunned to see stuff happening that was pretty unnecessary.

I have to give a plus-point to the fact that the anime Mahō Shōjo Madoka Magika was referenced when one of the characters sang Connect by Claris song. I barely see anime being referenced in GN/comics, so it is a big happy thing when it finally happens. 😀

The art is really pretty and I really love them. Though I have to also say that often the wounds on the characters looked a bit fake.

But I also have to give a minus-point for the fact there was a cliffhanger at the end. I HATE cliffhangers.

All in all, generally a good book, with good themes (just could do without the drugs) and pretty good art.

Will I be checking out the next book (whenever it comes out)? I am not sure yet. Maybe I will, for now I will say no though.