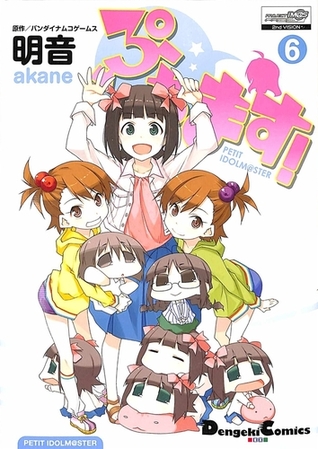 I am even thinking of lowering my rate. And I am not sure if I will continue with this series.

Don’t get me wrong, it is still a fun series. But it just feels so much the same. The same old jokes, the same old puns between characters, the same old character traits. I just wish they would mix and match a bit.

The puchidols also annoyed me at times with their behaviour. I would think that after so many volumes they would know not to piss of x or x or x, but instead they still do it.

I also would have liked some more puchidols, maybe not related to the Idols, but instead just other characters that sometimes pop up in the manga.

The art is still nice and fits the comedy style.

I liked that we also saw a few hints to the idols and their jobs. I would have liked to see more, maybe with added antics of the puchidols (though again, not too often, as it will get old and stale).

All in all, I am a bit disappointed. I was really happy to see a new volume, but I guess that unless they change up some stuff, I will just stay away from this series for now.