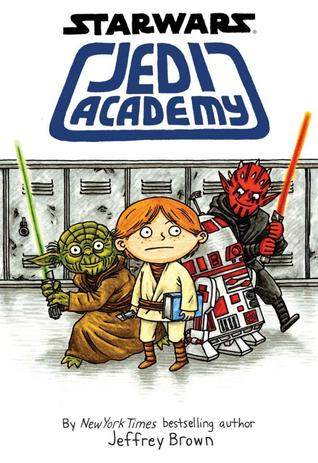 Thanks to my boyfriend for giving me the boxset of these as a present! <3

This was such a fun, delightful book. I am so happy that I got these as a present (my boyfriend knew just how much I wanted them). The book is a diary, with added letters, posters, comics, it was truly fun how much diversity there was in the material. From written diary entries to comic entries, you really get a feeling that you know Roan, that you are there with him in the Jedi Academy.

I loved the Jedi Academy, I felt sorry for Roan though for a bit. Rejected at one school, doomed to go to the Planter School (which sounds absolutely dreadful), and then (magically and amazingly) getting invited to the most exclusive school of all time, and one where you generally don’t get in when you are Roan’s age. So everything is new to him. From finding the Force (everyone seemed to be able to do it), to lightsabers, to Yoda and his funny way of talking. Luckily, Roan is one to make friends, and he soon has several people who he can call friends, and also one special person (which was just adooooraaaablee!). Sadly the Jedi Academy also hosts some not so nice characters, characters I will be seeing on the dark side sooner or later.

There was just one little thing I didn’t like. The first semester was quite long, but the second one just flew by. I just wish the second semester had gotten a bit more pages. There seemed to be all kinds of fun things, and while most things did get mentioned, it still felt a bit too fast.
Still I like that each year of Jedi Academy will mean one book. Though it will also mean the series will be over soon.

I also have to give a special mention to the adorable and cute little brother of Roan, who tried to act like his brother and lift up cups or stuff (by holding it) and going that he was using the force! So cuuuute!

The Jedi Academy really seemed like a great place to be, and I wish we had schools like that here. I wouldn’t mind learning to use the Force (would make it easier to carry around my books, or lift them from one place to another), or dancing with a lightsaber. And then there are all kinds of other classes which just look so much fun!

I do have to wonder why Roan wasn’t picked for that Pilot school, we were given some reasons, but given his grades, his determination, his awesomeness with fixing stuff, I do wonder if it wasn’t a ploy all along. Since Yoda did mention that Roan had a lot of potential, and generally people don’t get picked to go to Jedi Academy when they are Roan’s age.
Maybe we will find it out in the next book(s). Would be a nice twist to the story.

It was great fun to see all the species that I know (and often loved) from the Star Wars universe, to see their worlds, to read about their worlds. And of course it was great to see Yoda is around, he is always so interesting and funny. Though his speech gives me a headache at times.

All in all, I would highly recommend this book to everyone, this is one amazing book, and I think everyone (young and old) will love it!