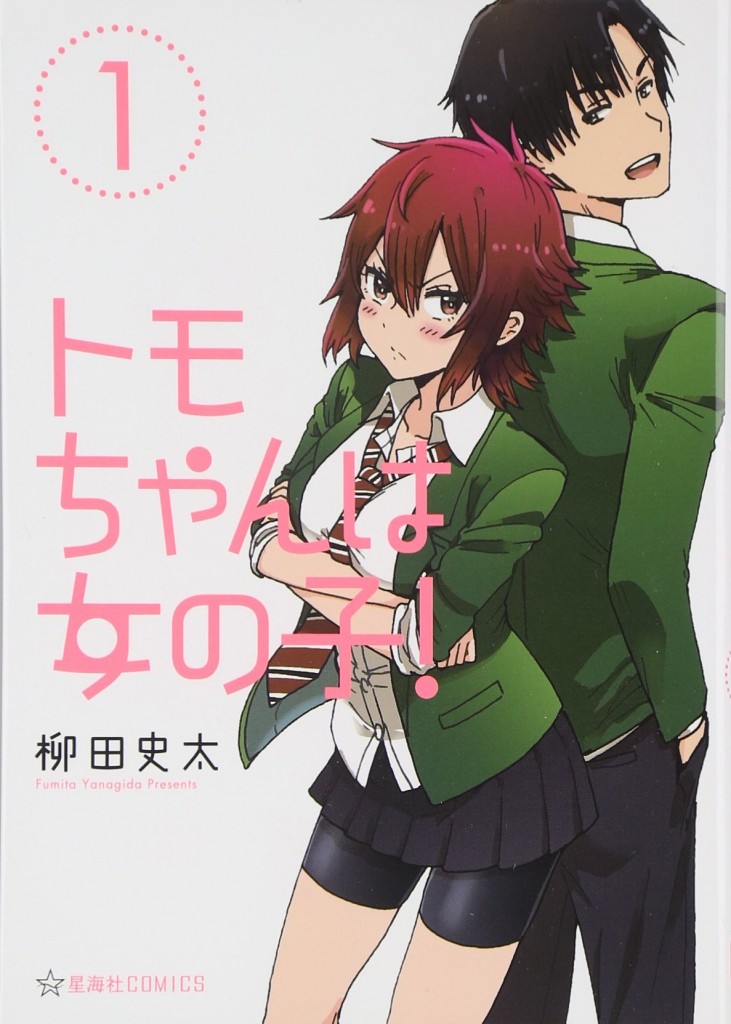 I always love finding new manga to enjoy and to follow. And boy, did I find myself a new fun manga!

The manga is about Tomo, a very tomboyish girl in a lot of ways, but she also has a girlish side to her, for instance she just loves her childhood friend Jun. Yes, loves him. Sadly, Jun isn’t seeing Tomo as a potential girlfriend. Oh no, the guy just sees her as his best guyfriend. Smacking her on her butt, punching, talking about girls, being quite insensitive. Tomo is super-embarrassed most of the time, though instead of being embarrassed the girl way, she just hits, smacks, kicks, or practically kills the guy. As you can imagine, this is not really helping the situation. 🙂 Luckily Tomo isn’t alone, her best friend tries to help her out (though considering that friend… it isn’t always going well).

The first part of the manga is all about that, Tomo realizing her feelings for Jun and totally having no clue what to do about it. Her opinion would be to act tough or just hit him. It is really hilarious to see her try her best, and to follow the (not always so smooth) advice from her friend Misuzu. The second part introduces us to a new character and then the last part of this volume is mostly back to the first part only now with the addition of a new “friend”. I really liked that they went for this format. I am not entirely sure if I would have lived through 144 pages of just Tomo x Jun doing stupid stuff. Don’t get me wrong, it is pretty fun, and I just laughed my butt off when Jun fainted when Tomo didn’t have any bicycle shorts under her skirt and she flashed him when the wind popped up, but I don’t think I could stomach 144 pages of the same stuff over and over again.

I also like the book’s format. Each chapter/story is one page, it is kind of like a 4-koma, only with longer/wider panels. All of the stories connect and it just reads like one story, but there is a punchline in each of the stories/chapters.

Tomo was a delightful character. I just loved her and how she acted. At times I wonder how she could be this oblivious, how she could be like this, since, how can any girl be like this? So over the top airheaded.
But she also has a cute side to her, which she shows at times (though she confuses the heck out of people when she does this).

Misuzu, ah, she is the typical looks are deceiving kind of girl. Don’t think this girl is all prim and proper, oh no, this girl got a side to her that is quite scary. The things she would, and probably will do if someone does something to her or her friends. Oh dear, I think people should just run away and hide. Fast.
Still she is a great friend and I really liked her.

Jun, urgh, seriously dude, can’t you see you have a great girl next to you? Who loves a lot of the stuff you like, who looks awesome and cute. Why can’t you see that? And why are you so jealous when people do mention her? Do you still see her as a boy? Or a girl?
Jun was so dense, but at times he was really protective of Tomo, it was quite cute. Though I do hope in the later chapters he will be a bit more smarter about stuff.

And then we have Carol(l), I am not sure if I like her or not. She is a typical foreigner (not having a lot of knowledge of Japanese, blond, ditzy, big boobs, doing silly things). But she also has a mean streak to her, and I am not entirely sure if she truly means the stuff she says, or not.

The art is decent, nothing that stands out though, but good enough for me to enjoy the manga (since art is a big factor in manga).

I will be sure to read the other volumes when they come out, and I would recommend this manga if you are looking for a funny, cute manga.