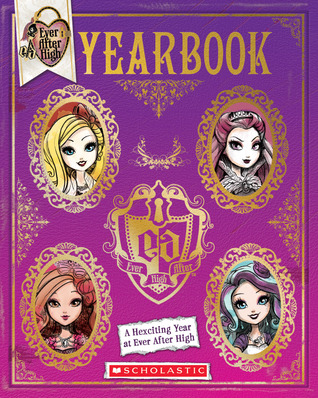 I just loved the Ever After High book series (well still do, since the series started again), and I am planning on watching the series as it seems a lot of fun. 🙂 The characters, the story, the setting, I just love fairy tales, especially retellings, so this one is perfect.

When I saw there was a Yearbook, with art from the official series and the series, with maps, cards and fun stuff I just knew I had to have it. It will give more insight in the series, and make the world come more alive then ever. And it did! I already knew quite a few things that happened, but some stuff was new (the stuff from the series).

I also liked the messages at the beginning and end pages, it really made it come more life + more personal, and it was so interesting to read. They were also different styles of writing/fonts, though at times that made it hard to read (so a few I didn’t read because of that reason).

The art was really pretty, though I did have to get used to the non-book series art. It looked a bit weird at times, but after a few pages I got used to it and actually started to like it.

Of course, it has been a few months since I last read Ever After High, so I did have to get used to the wordpuns/word use, but after a while I was just loving it again. So creative.

The book is set in sections with various stuff, from lessons, to balls, to characters and their descriptions. This book won’t bore you, if anything you will want to read this book over and over again.

Definitely recommended for those who love this series.