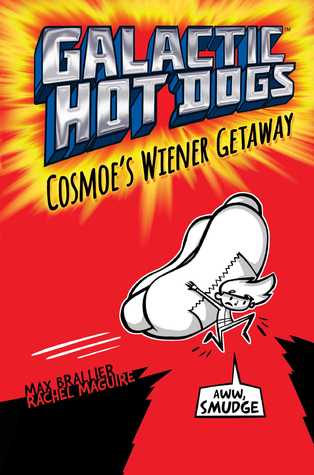 Though at times I must say I thought I had the sequel, a lot of stuff is still a mystery (like why our main character isn’t on earth or what happened to the pirate career of his friend), which is a shame. 🙁 Maybe we will get some answers in the second book.

This will be a like/dislike review, I still want to write one, but I just can’t write one that is like I normally write my reviews. So here goes!

Like:
-Hot dogs!
-Hot dogs restaurant in space!
-Battles in all sorts of silly manners.
-Battles in the form of a game (which I also want to play, like now!).
-Interesting and varied characters. We got a retired pirate, a earth kid, an evil princess. What could possibly go wrong there? Right?
-Lovely illustrations on each and every page, and in each and every nook and cranny.
-Story told through images + text which is just a brilliant idea. Switching it makes it all the better.
-Space! I loved the map at the end which showed us how the world looked, where everything was that we encountered in this book. Though I never believe it can be that small.
-Evil characters.
-Monsters.
-Characters who change into something different. It doesn’t always fit, but in this story it was perfect.
-Great and interesting story which captivated me from the start to the end.
-Hilarious power names for moves.
-Gaming!
-Super Hot Dogs
-Zombie Pirates!

I may have missed some, but I think I got most of my likes. 🙂

Didn’t like:
-The fact it felt like this was a book 2. I kept checking to see if I had the right book, or that I missed something.
-Which was caused by the fact that our two main characters seem to have a big history that they won’t tell.
-For instance the Space Pirate, why did he retire?
-What happened to Earth? Why is Cosmoe now wandering around managing a hot dog stand? Where are the other humans?

So all in all, this was a 99% good book, with just a few little things that I didn’t like. I will be continuing this series, and I will eagerly wait for book 2.

Would I recommend this one? Yes!