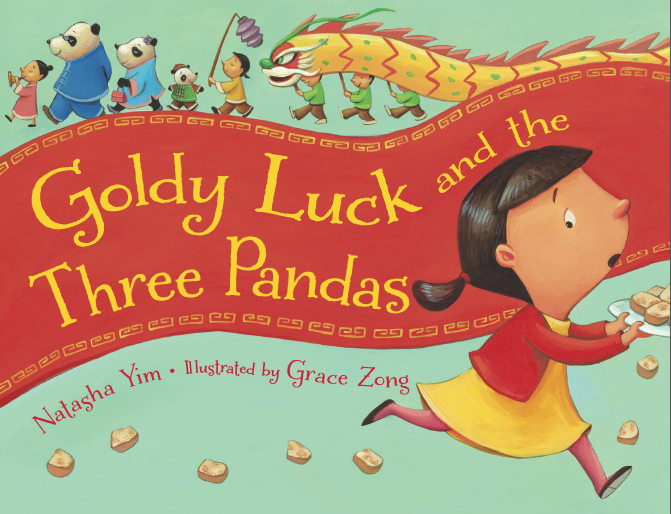 A decent book, but I just found it a bit weird that she had pandas living next to her in the building, while seemingly, everyone else was human. It makes me wonder, are there more panda families just living as humans? In case of Goldilocks original story there were just 3 bears living in a house in the woods, which is more logical. Oh well, I am sure the intended audience might not mind it that much, or find it weird to have bears just live like this.

I didn’t particularly like Goldy Luck, just like with the original Goldilocks, I just find her rude and intrusive. Oh hey, there is porridge here, let me eat it. Oh hey, chairs, let me just sit and break them. Oh hey, a bed, let me just lie in one. Sure, she feels guilty and sure she comes back, but I don’t know, maybe it is my age, but I just couldn’t like this little girl. I would have thought with such a strict mom she would have known that doing all that is a big no no. Though, now that I think of it, even when I was younger I was wondering what was wrong with this little girl to just stampede in a house like that.

I did like that the story was converted to something else. Instead of Goldilocks and all kinds of western stuff, we have now Asian stuff. It was really interesting to see that the bears transformed into pandas, that instead of normal porridge there was something called congee (which I had to look up and found it is rice porridge), the beds and the house also feature several Asian themes and on top of that it is all planned around a big holiday. The book also features explanations and a recipe, which I think were nice additions.

The art is really pretty and it was fun to look at them. At times though I found the lack of backgrounds a bit meh, a lot of other pictures in the book have the whole package, while some just are glaringly white, and it feels like there could easily have been a background, or at least a background colour.