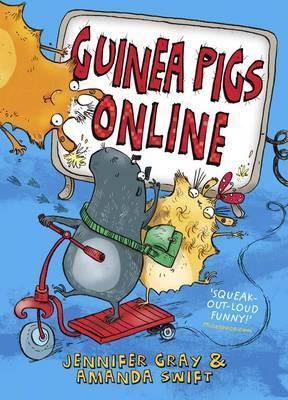 This was an amazingly, fun, cute book and I will be sure to get all the other books in this series as well.

I spotted one of the books in the series in my book store (magic), I didn’t realize it was book 4 though, luckily, I didn’t buy it immediately (due to me promising myself not to buy too many books). Instead I checked Goodreads and found out the book I saw was book 4. Thanks Goodreads for saving me from buying a book so far in a series. 😀

I love Guinea Pigs, they are super adorable and really clever (though they at times make sounds like a Velociraptor, which is kind of creepy). You will see that cuteness, the cleverness, and of course the adorableness (due to the pictures) in this book. A lot. So be warned, you will be squeeing and awwwing a lot. Though also being amazed at these little guys. They can access the internet, they can install wifi, ride on a doll scooter, they can play harp, and much much more, it was just amazing, and a bit over-the-top, but I didn’t mind that in this case.

Our main character is Coco, though Fuzzy and, later on, Eduardo, have a big role as well. Coco was quite nice and I loved her talks about the Palace and the Queen, at times I wondered if she really was a royal Guinea Pig or just acting all high and mighty. She did have a mean streak though, and said some really hurtful things. Though I think she didn’t always notice it. She is quite naive, but she is also dedicated. She could have decided to just leave Fuzzy to his fate, but no, instead she goes to find him, goes to rescue him, and that really shows that while she is quite mean at times, she also really cares about her friends and her owners.

Fuzzy was an interesting Guinea Pig, and also really kind, but also really a big of an idiot. He isn’t in the book for a big part of it, but the parts we do see him I really like him. I also like that even though he is a Guinea Pig he tries to cook and become a chef.

Eduardo, he really stood out as he wasn’t a domesticated Guinea Pig, he was a free Guinea Pig. He was a really interesting character, and I hope we will learn more about him in the next books that are coming. 🙂

The story, the villain? I loved them! I really flew through this book, before I knew it the book was over, the story was told, various things came to light, and I wondered where my time went. 🙂

The illustrations are really fabulous, I love how the Guinea Pigs are drawn. They really pop from the pages, as if they would at any moment just run through your house, use your blender, internet and whatever they can get to.
Though I have to wonder who coloured the cover, as Eduardo is being described as having a blue satchel, but he is wearing a green one on the cover. 😀

I would highly recommend this book to everyone! Read this! You will laugh, cheer and enjoy the antics of these Guinea Pigs.